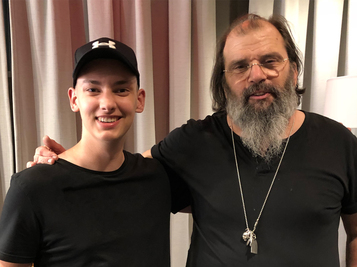 Up And Coming Aussie Duets With Steve Earle

Australian artist Angus Gill struck up an unlikely friendship several years ago with Steve Earle. For his new single “The New Old Me” (out 9/18), Angus tapped into his friendship with Earle who has always offered him sage advice to follow your own path, and not get caught up in people’s expectations.

“‘The New Old Me’ is a classic master vs apprentice duet,” explains Angus. “I was staying with my mate Allan Caswell up in the Blue Mountains and I brought out this hook I had in my scrapbook and we started writing to this outlaw Country feel. In my opinion, Allan and Steve share many similarities, from the fact that they are both revered songwriters, to the length of their beards. I’ve looked up to them both and have learn’t a lot from them.”

One his latest project Angus Gill & Seasons of Change, the Southern Stars award winner teams up with the members of Paul Kelly’s band for an edgy genre busting record 3 Minute Movies, featuring Peter ‘Lucky’ Luscombe on drums, Bill McDonald on bass, Cameron Bruce on piano, Fender Rhodes and Hammond B3 organ, Dan Kelly and Ashley Naylor on electric guitars. Mutual friend, alt-country legend Steve Earle, introduced Gill to the band back in 2017 and is featured on outlaw Country duet “The New Old Me”.

The 11-track album begins and ends in the Farfisa powered title track “3 Minute Movie,” which serves as a skeleton for the record. “I’m a very visual songwriter, I’m always searching for those seemingly small details, which in fact paint a much bigger picture. I realised that a majority of the material we tracked for this album were character and narrative driven songs, with a beginning, middle and an end…essentially 3 Minute Movies,” says Gill.

“Golden Guitar” nominated Gill recalls “I can still remember my Mother’s face/When I took that shaver to my saving grace” in the bildungsroman “Coming of Age,” written with songwriter Bob DiPiero. The ‘Bonnie & Clyde anomaly’ “Daylight Robbery” is a collaboration with Australian rock legend Mark Lizotte (Diesel), who provides acoustic and electric guitars, backing vocals, mandolin and other stringed flourishes on the track. The bagpipes make a prominent return to rock music in “Skin Story” and a horn section makes an appearance in the ‘side-street labyrinth’ “Acquainted With The Night,” which grapples with mortality. The anthemic “Hey Underdog,” co-written with Hall of Fame Songwriter Jeffrey Steele, Grammy winning Vicky McGehee and Providence David, features the Beatles inspired ‘guitar into a Leslie speaker’ sound.

From humble beginnings as a 10-year old entertaining crowds at a popular heritage theme park in his hometown of Wauchope, to opening for the legendary Kris Kristofferson and becoming one of the youngest Australians to perform on the Grand Ole Opry in Nashville Tennessee, this small town NSW born ‘old soul’ is quickly gaining a strong reputation for his formidable song craft, distinctive vocals and rock solid work ethic.

Music editor for Nashville.com. Jerry Holthouse is a content writer, songwriter and a graphic designer. He owns and runs Holthouse Creative, a full service creative agency. He is an avid outdoorsman and a lover of everything music. You can contact him at JerryHolthouse@Nashville.com
Previous 2020 Americana Honors & Awards Show Canceled
Next Jason Isbell Coming To The Caverns