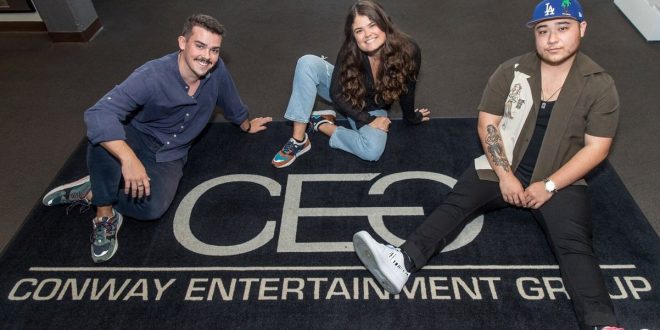 Troubadour Blue, has signed with Conway Entertainment Group as their exclusive booking agency. Brandon Mauldin will serve as the responsible agent for the singers/songwriters/players that just recorded their debut project with producer Tammy Rogers King.

Daniel Kim Ethridge and Brenna Wheeler met while students at Belmont University and began writing and performing together a few short years ago. Once Wheeler’s brother Eli graduated from Elon University, he joined the fold. The trio has written all tracks on their debut album and share lead vocals.

A couple of us from Nashville.com happened to catch Troubadour Blue opening for the Wooks at the Basement recently and it’s clear this band is going places. Tight harmonies and a fresh sound so get out and see them if you can. Troubadour Blue has played throughout the south this fall and will embark on a mini tour in early January throughout Florida, Tennessee, and several other states.

Music editor for Nashville.com. Jerry Holthouse is a content writer, songwriter and a graphic designer. He owns and runs Holthouse Creative, a full service creative agency. He is an avid outdoorsman and a lover of everything music. You can contact him at JerryHolthouse@Nashville.com
Previous Eric Schroeder’s New LP Out Today
Next The Gatlin Brothers Celebrate 45 Years As Opry Members