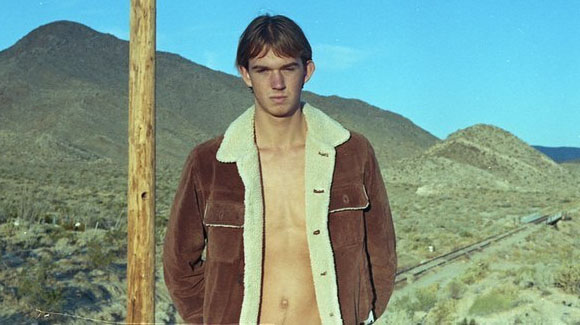 Today, Eric Schroeder shares his new LP, The Crucifixion of Eric Schroeder, which follows his first album of 2021, The Kid, released April 20. Both records were released via Earth Libraries.

“Produced and engineered by Kevin Basko, this record was recorded in his humble home in Philadelphia, PA,” said Schroeder. “The recording experience was one of the most unique and surreal experiences I have had in my lifetime. Waking up, rolling out of bed into the studio, and recording within the hour had a significant impact on the quality of the songs and how fast we recorded them. Kevin had a great and complex influence on these songs that could only come from his mind and his mind only. Living in that home for that week felt like I was truly living in the art and completely immersed in a space of creativity and passion.

“Half of the songs were written on a month-long writing spree, while the others were picked from a back catalog of three months’ worth of music. This album is intended to be as deep in its country and folk roots just as it is deep in rock and roll music, while still never completely one or the other. These are some of the best character narratives I have written and also some of my most personal and transparent songs.”

He continued on the inspiration behind the album, saying “This album was inspired by my addition of an electric band to my songs. It had an influence on me to try and write songs that sounded more suitable for a band and to write songs that were simpler in terms of the music itself. My biggest inspiration is the self-doubt and self-depreciation that forces me to write more songs and to a higher and different quality.”

Music editor for Nashville.com. Jerry Holthouse is a content writer, songwriter and a graphic designer. He owns and runs Holthouse Creative, a full service creative agency. He is an avid outdoorsman and a lover of everything music. You can contact him at JerryHolthouse@Nashville.com
Previous WATCH: Australian Singer/Songwriter JD Reynolds’ “Whatever”
Next Troubadour Blue Signs With Conway Entertainment