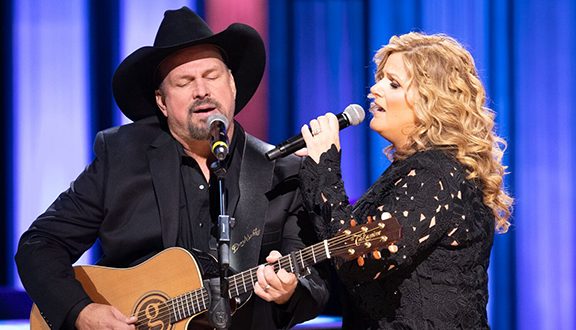 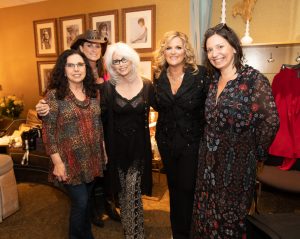 Opry member and Country Music Hall of Famer Emmylou Harris surprised both the audience and Yearwood by taking the stage to introduce her good friend. “From the moment we first heard that stunning voice and saw that beautiful smile, we fell in love with Trisha Yearwood,” Harris began. “She would of course become and remain one of the shining stars on the Opry stage or any stage.”

At first overcome by her musical hero Harris’ words, Yearwood shared with the audience that she was wearing a necklace which had once belonged to another hero, Patsy Cline, and had been given to her by Cline’s family on the night of her Opry induction. She went on to sing “Sweet Dreams”, a song she’d sung on her induction night that had been a hit for both Cline and Harris.

Ricky Skaggs, who had invited Yearwood to become an Opry member at the Ryman Auditorium in January of 1999, then took the stage for a duet on “Two Highways,” and along with Harris presented Yearwood with an Opry 20th Anniversary Hatch Print.

Following Yearwood’s “Wrong Side Of Memphis,” the Grammy ® -winner watched with the audience as a video rolled with congratulations messages from Yearwood’s friends and admirers including Kelly Clarkson, Reba McEntire, Brenda Lee, and Garth Brooks. “That last guy was cute,” Yearwood said, introducing Brooks to the crowd for a duet on “Whiskey To Wine.” While on stage, Brooks noted that while Yearwood credits Harris as one of the artists who inspired her to move to Nashville and pursue a music career, he has met hundreds of young women who now say the same of Yearwood.

Rounding out her evening, Yearwood reflected on having been inducted into the Opry by Porter Wagoner and sharing that Wagoner always called on her to “sing the one that brung ya.” Kicking off her No. 1 debut single “She’s In Love With The Boy,” Yearwood cheered, “We’re gonna do this again in 20 years. Count on it!”

Music editor for Nashville.com. Jerry Holthouse is a content writer, songwriter and a graphic designer. He owns and runs Holthouse Creative, a full service creative agency. He is an avid outdoorsman and a lover of everything music. You can contact him at JerryHolthouse@Nashville.com
Previous Song Suffragettes At 5 Years And Going Strong
Next Jake Owen Reveals Track Listing From New Album Directly To Fans