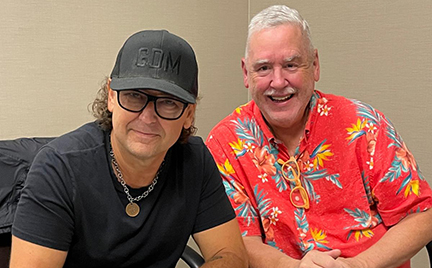 Singer, songwriter and guitar slinger Tommy Townsend has signed with BFD/Audium Nashville, it was announced today by company GM Chuck Rhodes. Townsend’s first album from the label will be Southern Man, 10 songs produced by Waylon Jennings and Jerry “Jigger” Bridges over 20 years ago but never officially released. Several songs will be released to streaming services in the coming months, with the full album being available early in 2022.

“Tommy Townsend is Country Soul personified!” said Rhodes. “From standing next to Waylon Jennings on stage, to carrying on the Waylon tradition with Waymore’s Outlaws, he does his mentor proud with the previously unreleased gem called Southern Man.”

Southern Man was recorded over several years with both Jennings and his tour manager and bass player Jerry “Jigger” Bridges producing the tracks. Jennings contributes his distinctive vocals on several of the songs. Bridges also has production credits on Top 10 Jennings’ hits such as “America,” “Drinkin’ And Dreamin’” and “Never Could Toe The Mark.” In introducing the music years ago, Waylon is quoted as saying: “This is my good friend Tommy Townsend…He is one of the most soulful singers I know.”

“Watching what Chuck and Bob Frank were doing with Audium, I knew that could be the perfect home for me and especially the Southern Man album,” said Townsend. “Their excitement for the album and for my music is exactly what an artist thrives on, and I look forward to this being a long and prosperous relationship.”

Townsend first met his outlaw hero as a teenager at a concert in Northeast Georgia. After the show, Townsend’s parents talked their way past the Hell’s Angels security guards and into the backstage area, where they introduced his son to the man who would become Tommy’s inspiration and mentor.

Jennings took the aspiring artist under his wing, later inviting him on stage to play guitar or sing a song. Tommy and Waylon spent time talking about lessons learned from life and conveyed through songs. Townsend spent the better part of the last 15 years singing lead for Waymore’s Outlaws, comprised of several of Jennings’ touring and studio musicians such as Bridges, the late Richie Albright, Fred Newell, Carter and Barny Robertson. In addition to his own dates, he continues to perform with Waymore’s.

Shooter Jennings produced Townsend’s Turn Back The Clock 2018 album, which was released on the Black Country Rock label. His “Drinkin’” single, written by Holly Williams, received strong airplay from Country and Americana radio. The corresponding music video continues to receive play across the country.

Music editor for Nashville.com. Jerry Holthouse is a content writer, songwriter and a graphic designer. He owns and runs Holthouse Creative, a full service creative agency. He is an avid outdoorsman and a lover of everything music. You can contact him at JerryHolthouse@Nashville.com
Previous Maren Morris “The Bones” Certified 4x Platinum
Next Billy Strings Will Wrap Up 2021 Tour Here In Nashville