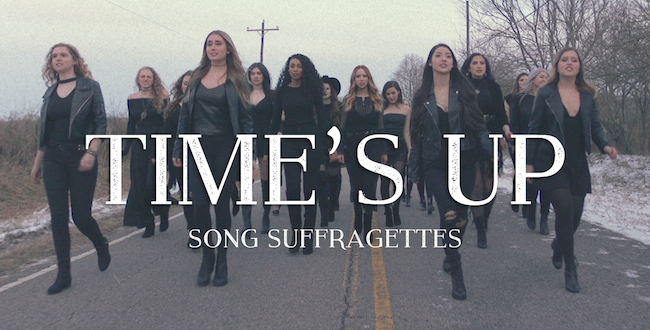 Nashville’s all-female singer-songwriter collective, Song Suffragettes, pointedly address gender inequality and sexual misconduct against women with a new song aptly-titled “Time’s Up” and an accompanying music video. The project and the women involved give a direct and unapologetic voice to the injustice and mistreatment of women everywhere, both inside and outside the entertainment business. The song and music video have already been embraced by iTunes and Apple Music, who added the song into their top playlist: A-List Country. Radio Disney Country will premiere the song today and feature it on the Radio Disney Country Spotlight show airing on Radio Disney. The music video arrived at midnight last night on VEVO and you can watch it here.

“Me and the girls were watching the Golden Globes, drinking wine and wearing all black. During one of the many inspiring speeches that night, I just felt the weight of what was happening — how I was going to tell my daughters and granddaughters about this one day,” said Kalie Shorr, a co-writer on the song and CMT Next Women of Country member whose song “Fight Like A Girl” made waves in 2016 for its female empowering message, “It came together so easily and  flawlessly because the amazing girls of Song Suffragettes were so passionate about the cause and willing to move around their schedules to make it happen. The team behind Song Suffragettes hustled so hard to make this project come to life making our idea a reality. I have been so inspired by this whole reckoning that’s been happening and it just  felt so obvious to connect that to what we do at Song Suffragettes.”

The women of Song Suffragettes are using their unique platform to add their voices to the current conversation on gender inequality and sexual harassment prevalent throughout America and on a local level within the country music industry. Earlier this week, Rolling Stone Country released an article discussing the history of sexual misconduct and harassment in country music radio:

“They reveal an environment where artists and other music professionals – especially women – are expected to be overly accessible and use sexuality as currency when visiting stations and meeting with certain program directors, or attending industry events, in the hope of having their song added into rotation.” – Marissa R. Moss, Rolling Stone Country

The proceeds from the sale of the song will benefit Time’s Up, an organization that created a unified call from women in entertainment to end discrimination, harassment and abuse of women everywhere.

About Song Suffragettes
Song Suffragettes is a collective of female singer-songwriters who perform every Monday night at Nashville’s Listening Room Café. With a mantra of #LetTheGirlsPlay, Song Suffragettes has featured close to 200 women in the past 3+ years resulting in multiple publishing and record deals for some of Nashville’s brightest talent. For more information please visit www.songsuffragettes.com.