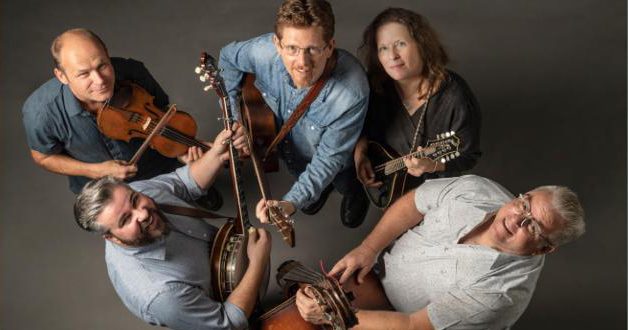 Tim O’Brien recently announced a headlong leap back into traditional bluegrass with his new full-length album, Tim O’Brien Band. Due for release on March 15, 2019 , Tim O’Brien Band , the title a sly nod to traditional music’s often eponymous band names, is a collection of not just old-school leaning music, but also of world-class musicians perfectly aligned in intention and ability. In addition to Tim, Mike Bub (bass) , Shad Cobb (fiddle) , Jan Fabricius (vocals/mandolin) and Patrick Sauber (banjo/guitar) make up this unstoppable band, who, from recent live performances, may be familiar to Tim O’Brien fans. Tim says, “This crew has the potential to make ten more records together and never reach the limit of the possibilities.” The only guest on the recording is O’Brien’s Hot Rize bandmate Bryan Sutton , who lends his distinctive guitar playing to two tracks.

Tim O’Brien Band is definitely a bluegrass record. That is to say, a bluegrass record that’s as much influenced by tradition as it is by Tim’s folklorist nature which he’s become known for. Of the five original songs on the record, O’Brien wrote two by himself. Jan Fabricius, Shawn Camp, and The Black Keys’ Dan Auerbach contributed to the remaining three. The rest of the record is comprised of songs hewn from a number of Tim’s influencers, old friends, and contemporaries. Notable tracks include the album opener, “Diggin’ My Potatoes”, a blues-turned-bluegrass number learned from Big Bill Broonzy, a Chicago musician from the 1940s and a favorite of Tim’s, “Beyond”, a gospel version much like “Ghost Riders in the Sky” co-written with Shawn Camp, and “Bolero-meets-Klezmer” instrumental “La Gringa Renee”, a mandolin-driven ode to Tim’s partner Jan Fabricius. Then, there’s Tim’s minor-key rendition of Woody Guthrie’s “Pastures of Plenty”. An urgent song about standing up for migrant workers in the 1940s, Guthrie’s lament may be as important now as it’s ever been. Tim realizes that, remarking, “Singing his [Woody’s] words can’t hurt in these times, as the same story continues in the USA.” The songs of Tim O’Brien Band are as diverse and playful as the records of Tim’s past, but this new era is a touch more earnest and urgent without losing the merriment that fans know and love.

Music editor for Nashville.com. Jerry Holthouse is a content writer, songwriter and a graphic designer. He owns and runs Holthouse Creative, a full service creative agency. He is an avid outdoorsman and a lover of everything music. You can contact him at JerryHolthouse@Nashville.com
Previous Legendary Songwriter “Whitey” Shafer Passes
Next Renowned Keyboardist Reese Wynans Announces First Solo Album