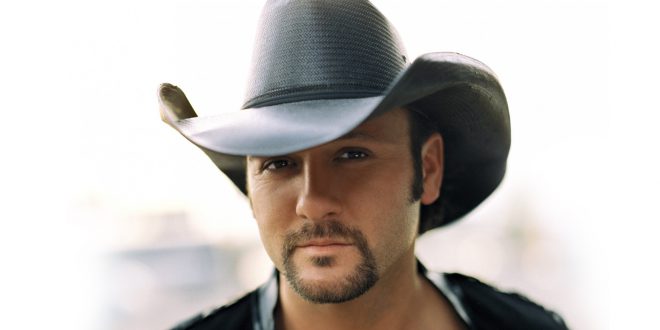 Tim McGraw To Perform In Cuba 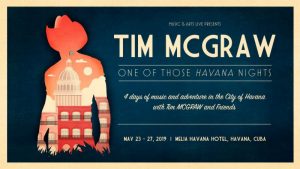 Music & Arts Live has announced TIM MCGRAW: ONE OF THOSE HAVANA NIGHTS, an historic cultural exchange set for May 23 – 27, 2019, in Havana, Cuba. TIM MCGRAW: ONE OF THOSE HAVANA NIGHTS will feature four days and nights of music and activities, including two unique headline concerts from the GRAMMY ® Award-winning superstar, performances from a number of Cuba’s greatest musicians, and visits to Cuba’s most important museums and cultural institutions.

TIM MCGRAW: ONE OF THOSE HAVANA NIGHTS will see McGraw performing two very special acoustic concerts, one exclusive to the group at the intimate Teatro Bellas Artes and another open to the Cuban public at Havana’s renowned Teatro Mella. The concerts will also feature support from some of Cuba’s most beloved musicians and bands, including Carlos Varela, Traditionales De Los 50, and GRAMMY ® Award-winning Cuban music legends Los Van Van.

“I feel honored that I get to share my music with the Cuban people,” says McGraw. “What an incredible opportunity. For me, music transcends language. There is a heart and soul to music that all people understand on some level. Cubans have such an intimate relationship with music, I’m happy we’ll get to share that together.”

TIM MCGRAW: ONE OF THOSE HAVANA NIGHTS marks the latest in a series of extraordinary cultural exchanges presented by Music & Arts Live following recent trips featuring Rufus Wainwright, Ben Folds, and Tommy Emmanuel, as well as the upcoming BLONDIE IN HAVANA, set for March 15 – 18, 2019. Though individual travel for U.S. Citizens to Cuba is currently discontinued, Music & Arts Live is fully licensed by both the U.S. Government (Department of Treasury, Office of Foreign Asset Control) and Ministerio de Cultura de la Rep ública de Cuba to lead this Cultural Exchange. Music And Arts Live would like to thank the Cuban Music Institute and Cuban Ministry of Culture for their ongoing support.

Music editor for Nashville.com. Jerry Holthouse is a content writer, songwriter and a graphic designer. He owns and runs Holthouse Creative, a full service creative agency. He is an avid outdoorsman and a lover of everything music. You can contact him at JerryHolthouse@Nashville.com
Previous Lettuce Is Back With A Tribute To Miles Davis
Next Kenny Chesney Adds Caroline Jones for ‘Songs for the Saints 2019 Tour’