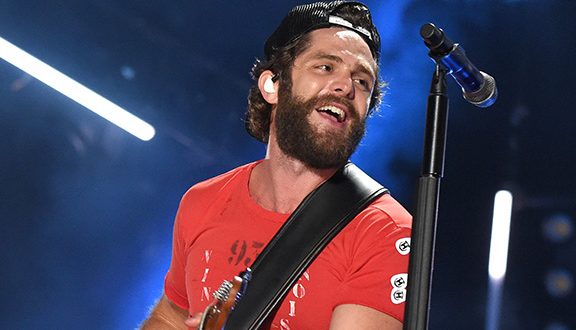 Thomas Rhett has earned his 16th career No. One hit as “Be A Light,” his current single shines brightly atop the Mediabase Country Chart this week. Thomas Rhett enlisted the help of friends Reba McEntire, Hillary Scott, Chris Tomlin and Keith Urban to amplify the song’s  message propelling a CMA Award nomination for Musical Event of The Year alongside his Male Vocalist of the Yearnomination.

“I’m completely blown away and humbled by the support of ‘Be A Light’ from the fans, country radio and the entire industry,” Thomas Rhett said. “When we decided to release this song in March, it was the best way I knew how to share what was on my heart, and I’m feeling so hopeful and encouraged to see so many of you inspired to take action because of it in your own communities. Thank y’all for coming together like this!”

In addition to Thomas Rhett and the song’s collaborators donating all proceeds from the single to the ongoing MusiCares COVID-19 Relief efforts, last week he and Big Machine Label Group President/CEO Scott Borchetta surprised Recording Academy Chairman and Interim President/CEO Harvey Mason Jr. and MusiCares Executive Director Laura Segura via a video conferencecall with an additional $100,000 for the relief fund.

Thomas Rhett will also appear at this year’s iHeartRadio Music Festival, kicking off on September 18 on The CW App and CWTV.com as well across 150+ iHeartMedia stations, on iHeartRadio.com and on the iHeartRadio app. The event will also air as a two-part TV Special on the CW – Sunday, September 27th and Monday September 28th, both nights from 8:00-10:00pm ET.

Music editor for Nashville.com. Jerry Holthouse is a content writer, songwriter and a graphic designer. He owns and runs Holthouse Creative, a full service creative agency. He is an avid outdoorsman and a lover of everything music. You can contact him at JerryHolthouse@Nashville.com
Previous Joe Bonamassa Announces After Party Showcase Following Ryman Concert
Next WATCH: Luke Combs New Video “Lovin’ On You”