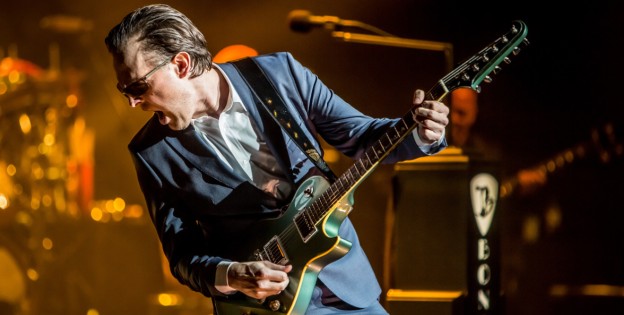 Guitar icon Joe Bonamassa announced a special After Party Showcase to follow his pay-per-view global streaming concert event broadcasting live from the legendary Ryman Auditorium in Nashville, TN on September 20th. Bonamassa will be performing his new studio album Royal Tea (recorded at Abbey Road Studios in London) in its entirety, a month before its release on October 23rd. He will also perform fan favorites from his recent 20th anniversary album,  A New Day Now . With full concert production lasting over an hour-an-a-half, the music will continue immediately following Joe’s show with Keeping The Blues Alive’s After Party Showcase . Highlighting some of the genre’s most talented, blues-forward acts of this generation, the Showcase will feature over an hour of non-stop performances from artists including: Ally Venable Band, The Cold Stares, Elles Bailey, Ida Mae, Jared James Nichols, Jontavious Willis, Katy Guillen & The Drive, Robert Jon & The Wreck, Southern Avenue, Tyler Bryant and Vanessa Collier.
Donations received during the After Party Showcase will benefit the Fueling Musicians program and help to continue its mission of assisting touring musicians unable to make a living due to COVID-19. The After Party was created to share these talented artists with a whole new audience – an opportunity to increase exposure for certain acts during these difficult times. Joe has personally taken it upon himself to raise awareness and highlight talented musicians who otherwise would not be able to reach these fans due to touring cancellations.
The After Party Showcase is included as part of the ticket purchase for Joe Bonamassa’s pay-per-view concert event on September 20 th  with Joe hitting the stage at 4pm Eastern / 3pm Central, broadcasting live worldwide. The Keeping The Blues Alive After Party Showcase will immediately follow Joe’s concert performance.
Tickets to the live pay-per-view event start at $20. Fans may also purchase a $35 ALL-ACCESS PASS. Offering fans the best value, the All- Access pass includes admission to the virtual concert on September 20 th , the Royal Tea digital album available on October 23rd, and a 1-year pass to Bonamassa’s on-demand video service. Bonamassa’s video service includes 17+ concert releases from Joe Bonamassa, Black Country Communion, and Rock Candy Funk Party – available at any time on most devices.
This one-of-a-kind concert is presented by Bonamassa’s non-profit, Keeping the Blues Alive Foundation (KTBA) . Each ticket purchase will include a donation to Joe’s Fueling Musicians Program, which to date has raised over $320,000 and has supported more than 190 touring musicians impacted by the COVID-19 pandemic.
For more information and for tickets visit  click here.

Music editor for Nashville.com. Jerry Holthouse is a content writer, songwriter and a graphic designer. He owns and runs Holthouse Creative, a full service creative agency. He is an avid outdoorsman and a lover of everything music. You can contact him at JerryHolthouse@Nashville.com
Previous Kendal Conrad – Nashville.com Picks
Next Thomas Rhett Scores 16th Number One