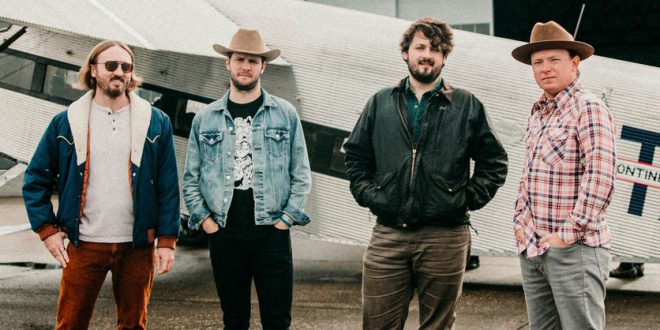 Rather than repeating the formal studio experiences for past albums, The Wooks—CJ Cain on guitar and vocals, Harry Clark on mandolin and vocals, George Guthrie on banjo and vocals, and Allen Cooke on Dobro—recorded Flyin’ High, their forthcoming album releasing on February 25th, over two sessions in Nashville in the home studio of bluegrass guitarist Jake Stargel. One of tracks that came out of the buttoned up yet still creatively loose studio experience was “Little While,” the album’s second single that is available everywhere today. Earlier this week, Folk Alley debuted the track alongside an alternate-take video that showcases the band’s roots: circled around one mic, perfect harmonies, and tasty picking. Folk Alley noted that “the animated music and vocals evoke the human tendency to look back and linger on the past that’s a part of us while celebrating those moments in the past that make us smile.” Folk Alley continued with, “There’s a melancholy undertone to the song, but the band’s high-spirited vocals remind us to “enjoy the things that make you smile” for they’re gone in a little while. The energetic music spirals joyously upward as the final notes of the song fade, leaving us smiling.” Listen to the track and see its accompanying video here. Stream Flyin’ High’s first two singles now via this link and watch the title track’s video by clicking here.

Digging deeper into the studio experience of this album, fans will be interested to know that the Lexington, KY based band was chasing a sound “like Bela Fleck’s Drive album or Tony Rice’s work at Arch Studios with Bill Wolf. That live feeling. So much of bluegrass these days is almost autotuned and fixed to the point of perfection. We were trying to run away from that quickly as possible,” says Cain. A full circle moment a few months later: Cain cold-called Bill Wolf to see if he would master the album. Wolf wrote back, asking to hear it—and then elevated Flyin’ High to the next level. “For a guy who’s done iconic albums all his life, he put a ton of work into this,” Cain says. “Bill told me to listen to it to see if I was satisfied with it, and I was like, ‘Man, what am I supposed to listen for?’ And he said, ‘Is it fun to listen to?’ I think he accomplished that.”

Look for the Wooks at the Station Inn right here in Nashville on March 5th.

Music editor for Nashville.com. Jerry Holthouse is a content writer, songwriter and a graphic designer. He owns and runs Holthouse Creative, a full service creative agency. He is an avid outdoorsman and a lover of everything music. You can contact him at JerryHolthouse@Nashville.com
Previous WATCH: Jason Aldean’s “Trouble With A Heartbreak”
Next UPDATE: 4th Annual “For Pete’s Sake” Benefit cancelled