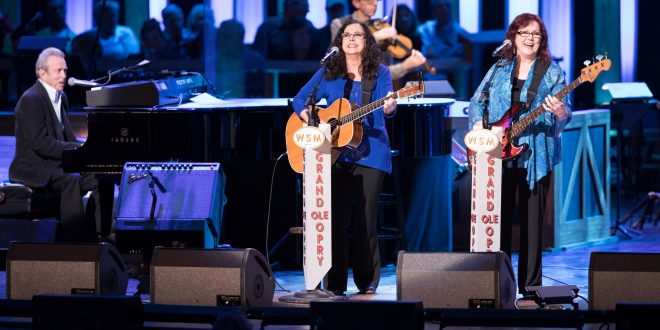 The Whites  will celebrate their 35th Anniversary as a Grand Ole Opry member when they perform on the Opry this Friday, March 1. They were inducted in the family on March 2, 1984. Daddy Buck and daughters Cheryl and Sharon have been showcasing their family harmonies as a professional stage act for more than 40 years. Among others on Friday’s show: Brad Paisley, Ricky Skaggs, and Marty Stuart. CLICK HERE for Tickets!

Jesse McReynolds  celebrates his milestone 55thAnniversary as a Grand Ole Opry member with an appearance on the Opry Saturday, March 2. McReynolds was inducted into the Opry family on March 2, 1964. He forged his singing and mandolin-playing reputation as one-half of Jim and Jesse, one of the most talented and acclaimed acts in bluegrass music. Jim McReynolds died in late 2002, and younger brother Jesse has continued the McReynolds sound. He’s best known as a bluegrass artist, but he has shown himself to be one of the most innovative and prolific mandolin players around. Among others on Saturday’s show: Alison Krauss, Old Crow Medicine Show, Riders in the Sky. CLICK HERE for Tickets!

Trisha Yearwood  will celebrate her 20thAnniversary as a Grand Ole Opry member with an appearance on the Opry Tuesday, March 12. Yearwood was inducted into the Opry family on March 13, 1999 by legendary Opry stalwart Porter Wagoner. Of all her accomplishments and accolades, being a member of the Opry holds a special significance for Yearwood. She recounts in the Opry Family Album, “My mother came here on her senior class trip from South Georgia. She wrote in her diary about seeing Hank Snow, Hawkshaw Hawkins, and all those people. When I was inducted as a member of the Opry in 1999, she brought her diary and got Hank Snow to sign it. So it’s not only about me, it’s also about my whole family.” Among others scheduled for the Opry March 12: Trace Adkins, Terri Clark, and Ricky Skaggs. CLICK HERE for Tickets!

Music editor for Nashville.com. Jerry Holthouse is a content writer, songwriter and a graphic designer. He owns and runs Holthouse Creative, a full service creative agency. He is an avid outdoorsman and a lover of everything music. You can contact him at JerryHolthouse@Nashville.com
Previous Blackberry Smoke Is at the Top of Their Game
Next Alabama Awarded The Tony Martell Lifetime Entertainment Achievement Award