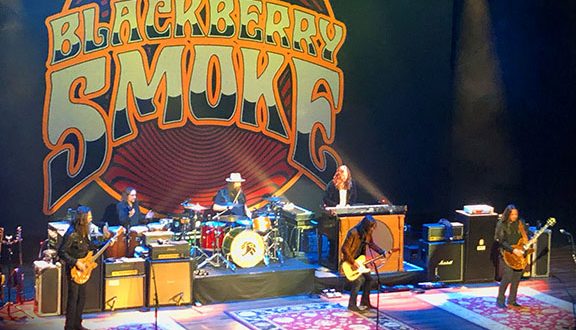 Blackberry Smoke Is at the Top of Their Game

2020 UPDATE! Blackberry Smoke Announces NEW Tour! Spirit Of The South Tour: A Celebration of Southern Rock and Roll Music with guests, The Allman Betts Band, The Wild Feathers and founding member of The Allman Brothers Band, Jaimoe. The Tour includes a stop at the Ascend Amphitheater in Nashville on August 9th, 2020.

Who’s the best current Southern rock band going right now? We did a not so scientific poll and asked that question on the Facebook page “Southern Rock Archives.” They’ve got over 30,000 members and the overwhelming answer was Blackberry Smoke. There was some spirited debate and of course lots of “Skynyrd Man!” but it was clear Blackberry Smoke was the majority favorite.

It’s hard to squeeze bands into a genre but if we’re talking that classic edgy rock, twin lead guitars with a country feel these guys are it — and at the top of their game. They packed the Ryman last Friday and Saturday night and we were lucky enough to be at Friday night’s show.

Lead singer Charlie Starr, like so many before him said he was nearly over whelmed looking up at those big stained glass windows. But the Atlanta band did the Mother Church proud and played 21 songs (see the set list below) with more than a few extended jams. The band had the crowd on their feet and singing along early with “Good One Comin’ On.” And one of the fringe benefits of living in Nashville is you can almost always expect some special guests. Chris Shiflett sat in several times through out the night. And the “Don of The Dobro,” Jerry Douglas played his electric dobro flawlessly on “Hard Times” and “Ain’t Got the Blues.”

The entire audience sang along and sang a verse of “One Horse Town” and then they ended the set with “Like an Arrow.” After thundering applause the boys came back out and did three songs for the encore with special guests, The Wood Brothers helping out on an extended jam of “Mother Mountain.”

I’m not sure when Blackberry Smoke is coming back but it’s not soon enough. The band obviously is at home here and Nashville songwriters can be found on many of their albums. What a great show!
–Jerry Holthouse 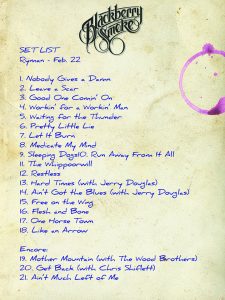 Music editor for Nashville.com. Jerry Holthouse is a content writer, songwriter and a graphic designer. He owns and runs Holthouse Creative, a full service creative agency. He is an avid outdoorsman and a lover of everything music. You can contact him at JerryHolthouse@Nashville.com
Previous Tin Pan South Schedule Released
Next The Whites, Jesse McReynolds and Trisha Yearwood to Celebrate Opry Milestones