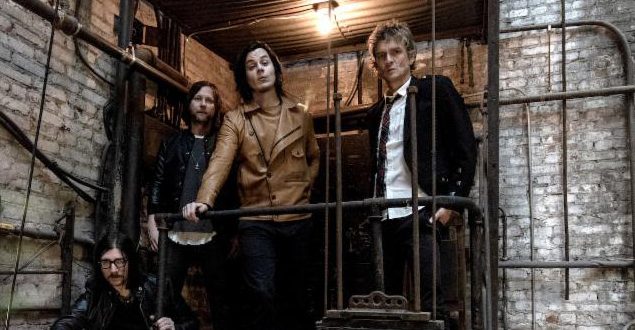 The Raconteurs Back With First New Music In 10 years

The Raconteurs – Jack White, Brendan Benson, Jack Lawrence & Patrick Keeler – are back with the release of their first new music in more than 10 years. The two new songs released by Third Man Records, “Now That You’re Gone” featuring Brendan Benson on lead vocals and “Sunday Driver” with Jack White singing lead, are available digitally worldwide today. This release coincides with the delivery of the only physical version of the tracks available on 7″ vinyl as part of Third Man’s Vault Package #38 celebrating the 10th Anniversary of the bands’ acclaimed second album, CONSOLERS OF THE LONELY.

Unique companion videos accompany both tracks and, in true Raconteurs fashion, were shot only one week ago and are available for your enjoyment now. “Sunday Driver” was directed by Steven Sebring – acclaimed photographer, filmmaker, inventor, and vanguard in artistic 3D imaging – and captured at the Sebring Revolution Media Lab in New York City. The video for “Now That You’re Gone” was directed by Dikayl Rimmasch (Beyoncé, Jay Z, Blondie) and features renowned burlesque performer Gia Genevieve. “The [“Now That You’re Gone”] video is a very rock and roll approach to the wide range of emotions a person goes through when dealing with a broken heart. Feelings of being weak, angry, vengeful and ultimately the strength to overcome and ‘crash’ through it all,” says Genevieve. “I had such a lovely time collaborating with such wonderful artists and people.”

“Now That You’re Gone” and “Sunday Driver” both stem from recent sessions for the long-awaited new Raconteurs LP, due for release sometime in 2019. “We’re knee deep in the trenches of our first new album in a decade,” White said to Mojo Magazine recently. “We have a vast amount of genre-pushing songs that bridge the gap between Detroit and Nashville rock and roll. The album sounds like a World War. It’s great to be co-writing songs with Brendan Benson again, the man is a song craftsman.”

Recorded and released in March 2008, the unannounced arrival of The Raconteurs’ CONSOLERS OF THE LONELY shocked the world at a time when coordinating a worldwide physical and digital surprise release was even less easily accomplished than it is today. The album – which takes its title from an inscription on the frieze of a Washington D.C. post office – proved a phenomenon, making a top 5 debut on the Billboard 200 on its way to earning the GRAMMY® Award for “Best Engineered Non-Classical Album,” as well as a nomination as “Best Rock Album.” Indeed, CONSOLERS OF THE LONELY finds the Raconteurs at their mightiest, exploring what it means to be a rock band in the classic sense. Full-on bombastic horn arrangements and gut-wrenching murder ballads sit side by side as the swaggering riffs and confident licks firmly establish the LP as one of the pre-eminent releases of the aughts.

Music editor for Nashville.com. Jerry Holthouse is a content writer, songwriter and a graphic designer. He owns and runs Holthouse Creative, a full service creative agency. He is an avid outdoorsman and a lover of everything music. You can contact him at JerryHolthouse@Nashville.com
Previous Listen To Krystal Keith Sing “O Holy Night”
Next Lou Doillon Set To Release “Soliloquy”