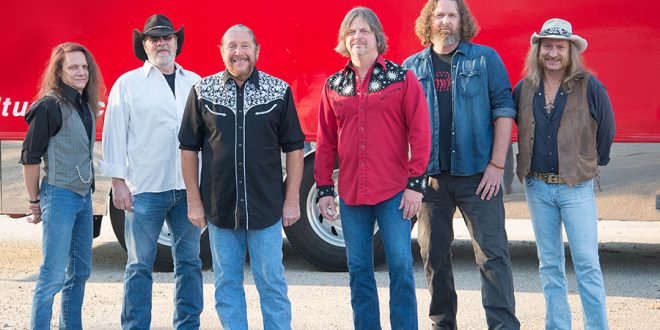 If you’re talking about legendary Southern rock bands, The Marshall Tucker Band (MTB) will always a part of that conversation. The band, known for classics like “Heard It in a Love Song,” “Fire on the Mountain,” “Ramblin’,” and of course the song everybody knows by heart “Can’t You See” will play the War Memorial Auditorium on April 19. MTB has played War Memorial multiple times but we asked co-founding member and lead singer Doug Gray how it felt to be coming back. “Well, me and Toy (Caldwell) started this thing right out of Viet Nam and Toy would be proud. Nashville wasn’t always our biggest fan but most people don’t realize we had country songs on our first seven records … songs that would be considered more country than some of the stuff that’s out there. When we played the Opry I almost cried because Toy and Tommy couldn’t be there. They were always the country side of MTB.”

Originating in Spartanburg, South Carolina in 1972 the original band consisted of Doug Gray, Toy Caldwell and his brother, bassist Tommy Caldwell, alongside rhythm guitarist George McCorkle, drummer Paul T. Riddle, and flautist/saxophonist Jerry Eubanks. Current members include drummer B.B. Borden, a former member of both Mother’s Finest and The Outlaws, multi-instrumentalist Marcus Henderson of Macon, Georgia, plays flute, saxophone and keyboards in addition to lead and background vocals, Pat Elwood on bass guitar, and Rick Willis on lead guitar and vocals, both of Spartanburg SC, are disciples of the Caldwell Brothers. Acclaimed lead guitarist and vocalist Chris Hicks recently rejoined the band after a two-year absence.

Grays all-time favorite Southern rock band is the Allman Brothers which happens to be the all-time favorite band of the opening act, Kyle Daniel, a young, up and coming Southern rocker who’s already getting critical acclaim. When we asked Daniel what he thought about opening up for MTB here’s what he had to say: “There are very few bands that make a mark on music like the Marshall Tucker Band has. It is an honor as a die-hard fan of southern rock n roll, to be opening for one of the greats. Sixteen-year-old me is absolutely freaking out about the opportunity.”

Gray says they’ll play all the hits because that’s what the fans want but they are working on a new album. Tickets are selling fast so get yours here before it’s too late.
–Jerry Holthouse

Music editor for Nashville.com. Jerry Holthouse is a content writer, songwriter and a graphic designer. He owns and runs Holthouse Creative, a full service creative agency. He is an avid outdoorsman and a lover of everything music. You can contact him at JerryHolthouse@Nashville.com
Previous Tour The Ryman Auditorium Free Of Charge
Next Striking Matches Doesn’t Hold Back With New Video