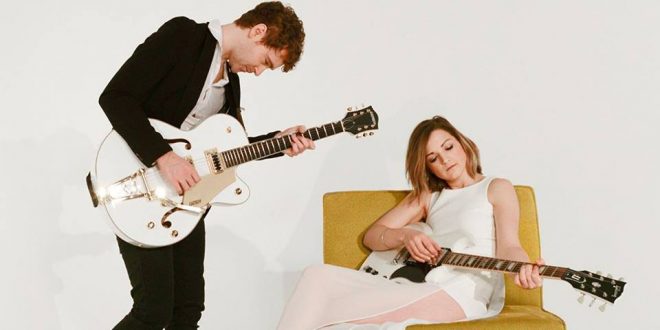 Striking Matches, has released a new music video for “Don’t Hold Back” from the forthcoming EP, Morning. The video was directed by Casey Pierce.

The Nashville-based duo is comprised of Sarah Zimmermann and Justin Davis; singers, guitarists and songwriters who met while both were students in a guitar class at Belmont University. The duo’s music is a fresh combination of blues, rock, and pop, with an approach that respects roots music traditions while making room for new musical thinking.

“We had so much fun making this video with Casey Pierce. When he told us he wanted to have Sarah spinning on top of a house of cards, we knew that really anything was possible and to let all three of our imaginations run a little wild was exactly the video this song needed. We wanted to evoke the feeling of not holding anything back, and it is definitely our most colorful and adventurous video yet, in every sense of the phrase.” ~Striking Matches

The two made their performing debut at Nashville’s prestigious Bluebird Café and made their recording debut with a self-released five-song EP that showcased their gifts as songwriters, vocalists, and instrumentalists. That same year, noted songwriter and producer T-Bone Burnett was hired to help coordinate the music for an upcoming television series set in Music City, appropriately titled ‘Nashville.’ Burnett and his team were impressed with Striking Matches, enough so that nine of their songs were used on the hit ABC show. Their first full-length album, Nothing But the Silence, produced by T-Bone Burnett, was released in March 2015.

Fast forward to today, the duo have settled in a style all their own that they’ve coined as “blues-pop” – an amalgamation of their blues and roots based guitar riffs, combined with pop melodies. Striking Matches have toured extensively both domestically and abroad and will be announcing 2019 US and European tour dates soon. The duo is gearing up to release three EPs in 2019, each with a distinct vibe and entitled, Morning (May), Noon (August) and Night (November). “Don’t Hold Back” appears on Morning.

Music editor for Nashville.com. Jerry Holthouse is a content writer, songwriter and a graphic designer. He owns and runs Holthouse Creative, a full service creative agency. He is an avid outdoorsman and a lover of everything music. You can contact him at JerryHolthouse@Nashville.com
Previous The Marshall Tucker Band Playing War Memorial April 19 with Kyle Daniel
Next Molly Tuttle: She Is So Ready