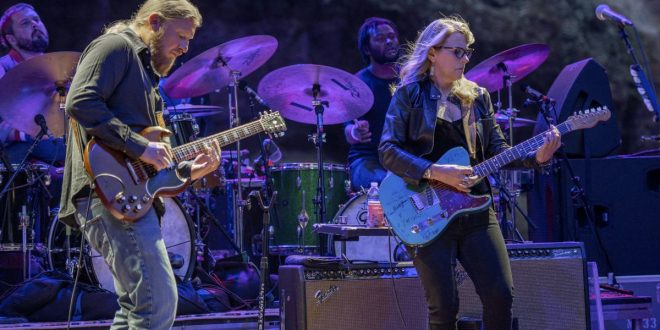 Tedeschi Trucks Set for 4 Nights at the Ryman

Following a very challenging yet creative year, Tedeschi Trucks Band, eagerly returns to the road in 2022. Highlights include a series of multiple-night residencies including the Ryman Auditorium here in Nashville. Led by renowned guitarist Derek Trucks and singer/guitarist Susan Tedeschi, these shows will feature the full, reunited 12-piece band.

Tedeschi Trucks Band first appeared on the Ryman stage back in 2012 with a singular appearance. TTB have now performed at the Ryman Auditorium every year since 2015 (except 2021). Fans have watched them grow from a singular night to an impressive four-night residency that will soon total 23 performances at the historic theater.

Tedeschi Trucks Band’s recent return to the road with the full band follows 18 months of uncertainty for live music. While off the road due to the pandemic, Tedeschi and Trucks launched the Fireside Sessions, a successful livestream series that featured a scaled-down lineup and unique renditions of their classic repertoire. Over the summer they took the concept on the road as Fireside Live – a series of socially-distant limited-capacity shows – drawing sold-out crowds across the U.S.

Tedeschi Trucks Band is also the subject of a newly-released documentary, Learning To Live Together: The Return of Mad Dogs & Englishmen, which Variety hails as “a serious blast of rock ‘n’ roll love… and a testament to how one gorgeously raucous rock ‘n’ roll moment can reverberate through the decades.” The film chronicles the historic Mad Dogs reunion concert spearheaded by Tedeschi and Trucks that took place at 2015’s LOCKN’ festival. Visit MadDogsDoc.com for theatrical dates and more information. Watch film trailer below.

In the midst of the rare time off, TTB convened in the studio to write and record a wealth of new songs for a future studio album. As the recording progresses towards an expected release in 2022, the album is growing into a unique conceptual project. In addition, Derek and Susan also used their time off to guest on albums by Oliver Wood, Doyle Bramhall ll, Gabe Dixon, Ryan Shaw, Neal Francis, and both appear on the recent Neal Casal project Highway Butterfly.

Music editor for Nashville.com. Jerry Holthouse is a content writer, songwriter and a graphic designer. He owns and runs Holthouse Creative, a full service creative agency. He is an avid outdoorsman and a lover of everything music. You can contact him at JerryHolthouse@Nashville.com
Previous Kellie Pickler To Host SiriusXM’s The Highway
Next Deborah Allen Releasing First Album In A Decade