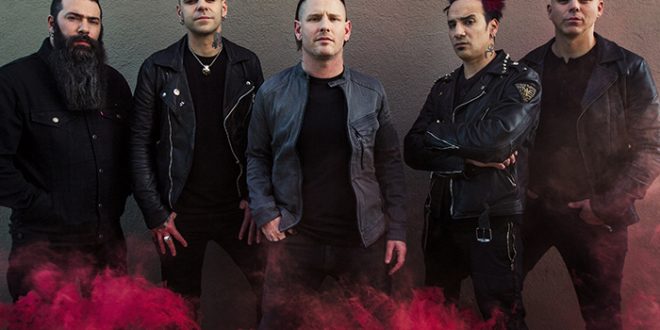 See Stone Sour in Nashville, TN at the Nashville War Memorial on May 2, 2018

Fronted by Corey Taylor, the vocalist of the 10-time Grammy nominated, one-time winning band Slipknot, Stone Sour are heading out on a headlining tour supporting their sixth studio album Hydrograd. The record was named “Hard Rock Album of the Year” at the 2017 Loudwire Music Awards. The band will be making a stop at the  Nashville War Memorial Auditorium in Tennessee on 5/2/2018, with Palaye Royale & ’68.

Check out the hook-laden single “Song #3,” which topped the Billboard Mainstream Rock Songs chart for five consecutive weeks, and “Rose Red Violent Blue (This Song Is Dumb & So Am I),” the video of which features a cameo appearance from glam rockers Steel Panther.

“It is kind of a departure, but not really,” says Taylor on Hydrograd. “To me, it’s more of an evolution. It’s taking everything that we’ve done on the last few albums, and really honing it down and turning that diversity into more cohesion and really finding the strength in the song to be able to express ourselves through all of these different genres that we’ve always dipped our toes in, whether it’s hard rock, or heavy, or metal, or just rock and roll, or straight up punk, or even in one of the cases a bit of California country.” He adds, “I don’t think it’s so much a departure, as it is just becoming more of what Stone Sour really means.”

Music editor for Nashville.com. Jerry Holthouse is a content writer, songwriter and a graphic designer. He owns and runs Holthouse Creative, a full service creative agency. He is an avid outdoorsman and a lover of everything music. You can contact him at JerryHolthouse@Nashville.com
Previous Naomi Judd And The Scott Brothers To Join City Of Hope Celebrity Softball Game
Next 10 Questions with Wade Bowen