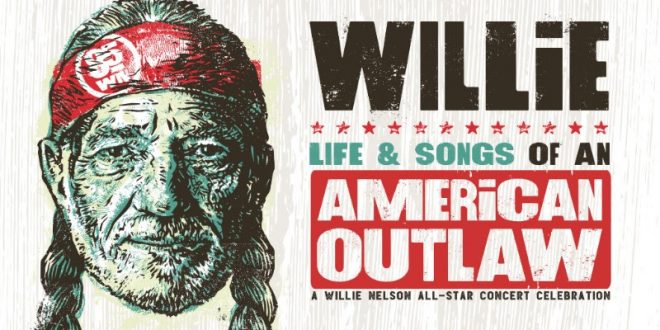 Stars Added to Willie: Life & Songs of an American Outlaw

The event will be filmed for a broadcast television special to premiere on A&E Network in 2019.

“Willie and his songs mean everything to music artists and fans alike. Like Willie, they have inspired us to remain true to ourselves in every possible way. This incredible lineup of artists on this show is a testament to that,” says Blackbird Presents CEO Keith Wortman.

In his 85th year, Willie Nelson is more prolific than ever. In 2018 alone, he’s released his 67th studio album (Last Man Standing), a stirring collection of his favorite Sinatra songs (My Way) and headlined the largest touring festival in North America (Outlaw Music Festival). Willie is America’s music hero. It’s hard to put into words what he means to singers, songwriters, musicians, and people all over the world. Through life’s ups and downs, heartbreaks and rewards, Willie and his songs have been a dear and constant friend to all of us. He’s a trusted father figure to millions of Americans by lifting them up through FARM AID and his annual JULY 4th PICNIC. He’s the clear inspiration for dozens of today’s biggest music stars
from all genres of music.

Music editor for Nashville.com. Jerry Holthouse is a content writer, songwriter and a graphic designer. He owns and runs Holthouse Creative, a full service creative agency. He is an avid outdoorsman and a lover of everything music. You can contact him at JerryHolthouse@Nashville.com
Previous Ronnie Milsap To Hit The Road On 76 for 76 Tour
Next Morgan Evans Releases Acoustic Version of “Things That We Drink To”