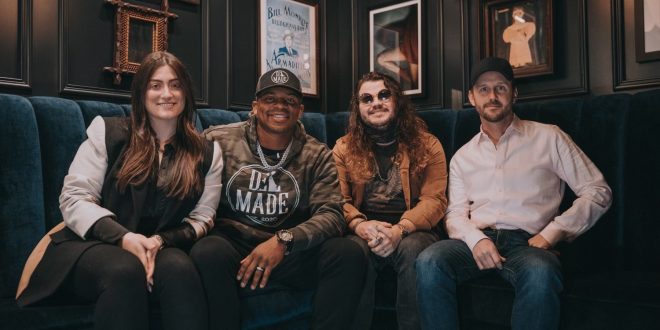 Sony Music Publishing Nashville and Jimmie Allen’s Bettie James Music Publishing today announced their partnership to sign rising songwriter Tate Howell to a worldwide agreement. Howell is the first songwriter to sign with Allen’s newly launched publishing company.
Tate Howell gained prominence as a songwriter and musician through his work as one of Allen’s closest collaborators, as both a co-writer and bass player. Most recently, Howell worked with Allen on his critically acclaimed, star-studded EP Bettie James, including co-writing the powerful hit “Why Things Happen,” featuring Hall of Famer Charley Pride and award-winning hitmaker Darius Rucker.

“From the first time I met Tate, he showed me he was motivated and willing to work. Not only is he one of my best friends, but he is also one of the hardest working and kindest people I know,” Allen said. “I feel like when a person comes along as talented as Tate, it’s easy to want to build a business around him. I’m honored to have him as the first signing to Bettie James Music Publishing, and I look forward to watching his career grow as a songwriter.”

Tate Howell said, “It’s truly surreal to get to work with such a distinct and historic company like Sony Music Publishing! I am so grateful for Anna Weisband and my team over at Sony, my road boss Mr. Jimmie Allen, and my manager Melissa Spillman for working so hard to help me make music and live out my dreams! Here’s to making so much more together.”

Anna Weisband, Sony Music Publishing Nashville VP, Creative said, “I have been impressed by Tate’s songwriting from the very first song Jimmie ever played for me. His work ethic, talent, and drive are unstoppable and inspiring! Couldn’t be more excited to welcome Tate to the Sony Music Publishing family.”

Multi-platinum, ACM Award-winning country songwriter and recording artist Jimmie Allen is one of today’s top and trailblazing country acts, known for his chart-topping hits including “Best Shot,” “Make Me Want To,” and his latest single “Freedom Was A Highway” with Brad Paisley. With the establishment of Bettie James Music Publishing, Allen aims to discover emerging songwriters and support their careers and create new opportunities for their songs. The company’s name is a continued homage to Allen’s late grandmother, Bettie Snead, and late father, James Allen.

Music editor for Nashville.com. Jerry Holthouse is a content writer, songwriter and a graphic designer. He owns and runs Holthouse Creative, a full service creative agency. He is an avid outdoorsman and a lover of everything music. You can contact him at JerryHolthouse@Nashville.com
Previous “The Queen of Bluegrass” Is Back With “Music Is What I See”
Next LISTEN: Breland And  Keith Urban “Throw It Back”