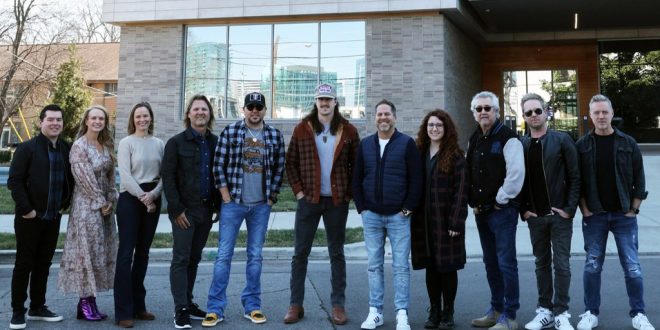 BBR Music Group/BMG today announced the signing of singer-songwriter John Morgan to Night Train Records. The North Carolina native joins the roster with a No. 1 hit to his name, having co-written the GRAMMY® nominated smash hit “If I Didn’t Love You,” by Jason Aldean and Carrie Underwood. The “Coldest Beer in Town” singer fuses guitar-driven Country muscle with heart-on-his-sleeve vocal firepower – to deliver a style that features a hint of danger inside its sonic beauty.

Growing up in the Appalachian Mountains, John began playing guitar at the age of eight before hitting the festival circuit in a family Bluegrass band for 10 years. With a love of guitar legends, John began songwriting, torn between planting roots in his hometown and following his dream. He eventually sold his small plot of land and toiled in nine-to-five obscurity upon moving to Nashville. Fate connected him with Kurt Allison and Tully Kennedy, two incredible songwriters and longtime bandmates of Country superstar Jason Aldean. One writing session led to another and eventually Aldean cutting eight songs written by John for his new album, MACON, GEORGIA, (including his current single “Trouble with a Heartbreak”). Aldean ultimately signed the young talent to Night Train Records, his imprint with BBR Music Group.

“The first time I heard about John Morgan was a 2am phone call with Aldean that lasted over 30 minutes as he told me why he wanted to sign him. He was so excited; he didn’t want to wait until the next day to talk about offering him a deal,” said Jon Loba, President BMG Nashville. “When we started working with John, it was easy to see why Jason picked up the phone and woke me up in the middle of the night…and I’m so glad he did!”

“Three years ago, I never would have imagined that I would be signed to one of the best labels here in Nashville,” said John Morgan. “I’m excited to get started on this journey and grateful for the team I have working with me.”

John is receiving a well-rounded education from some of the best in the business as he works toward his debut – from watching Aldean on tour every night as opener for the superstar entertainer’s Back In the Saddle Tour to working in the studio with Aldean, Allison and Kennedy (who are producing the music) and everything in between.

Music editor for Nashville.com. Jerry Holthouse is a content writer, songwriter and a graphic designer. He owns and runs Holthouse Creative, a full service creative agency. He is an avid outdoorsman and a lover of everything music. You can contact him at JerryHolthouse@Nashville.com
Previous Americanafest Tickets Go On Sale This Friday
Next WATCH: Scotty McCreery’s “Damn Strait”