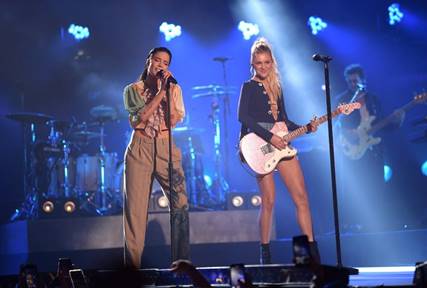 Halsey & Kelsea Ballerini team up for the newest installment of “CMT Crossroads,” premiering Wednesday, March 25 at 10PM ET/PT on CMT. The 70th episode taping was filmed during a special public outdoor taping at the Ascend Amphitheatre in downtown Nashville. Watch the duo perform Kelsea’s emotional single “Homecoming Queen” (above) and Halsey’s hit “Graveyard” below.

Music editor for Nashville.com. Jerry Holthouse is a content writer, songwriter and a graphic designer. He owns and runs Holthouse Creative, a full service creative agency. He is an avid outdoorsman and a lover of everything music. You can contact him at JerryHolthouse@Nashville.com
Previous Dan + Shay The (Arena) Tour Has Been Postponed
Next “Seasons Change” Certified Gold For Scotty McCreery