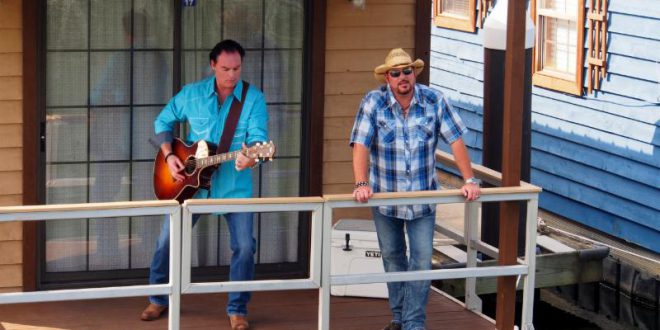 Smith & Wesley will receive two unique premieres for their upbeat new “Hook, Line & Sinker” music video. The nationwide Heartland Network will air the clip Friday, April 27 at 11 a.m. CST, followed by airings on April 28, 29 and 30 at 5 p.m., 11 p.m. and 1 p.m. CST, respectively. A first for Yamamoto Custom Baits, the high-end fishing lures manufacturer will air the fun video on its Facebook page shortly after the first Heartland airing.
The clip opens with funnyman Cledus T. Judd mumbling about his wife and plopping down beside a lake for some relaxing fishing before quickly drifting off into a dream. Shift to Chickamauga Lake outside Chattanooga, Tennessee, where Smith & Wesley brothers Scott and Todd Smith are hanging out at a marina. Cledus’ dream has him at the same marina, as bikini clad Alesha Grant – who is seemingly way out of his league – actually takes a liking to him.
Smith & Wesley perform on a pontoon boat as professional BASS angler Mike DelVisco maneuvers his Texas Roadhouse fishing rig around the set. Fans will have to watch the clip to the end for the hilarious and surprising ending.
The duo again enlisted Flick Wiltshire to direct and Deb Haus to produce “Hook, Line & Sinker,” the same two who helmed Smith & Wesley’s critically-acclaimed “Superman For A Day.”
Deeply rooted in their North Georgia heritage, the Smith & Wesley sound speaks to people of all walks of life. In addition to their chart successes, all of their single releases have topped research categories to become industry and fan favorites alike.

Music editor for Nashville.com. Jerry Holthouse is a content writer, songwriter and a graphic designer. He owns and runs Holthouse Creative, a full service creative agency. He is an avid outdoorsman and a lover of everything music. You can contact him at JerryHolthouse@Nashville.com
Previous Florida Georgia Line Score 14th Number One
Next Parmalee Releases “Six-Pack” With “Hotdamalama”