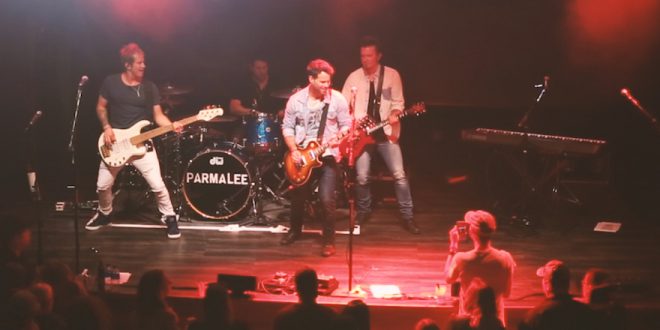 Following the 4/20 release of their Party Pack, Stoney Creek Records’ platinum-selling band, Parmalee, has a few reasons to get the party started. They launched their brand new EP, the world premiere of their music video for their latest single “Hotdamalama,” aired on CMT’s Hot 20 Countdown and they’ve officially debuted their single to Country radio. In celebration, Parmalee threw their family, friends and fans in Nashville a party (of course) Monday night, playing to an enthusiastic crowd of friends, family and fans. “Hotdamalama” marks the band’s seventh radio single, with the previous six all reaching Top 40 in Country radio including the Platinum-certified smash “Carolina,” which was a multi-week #1 hit.
The Party Pack, available everywhere now digitally, cracks open with “Hotdamalama. The music video for the fun-in-the-sun track provides just as much heat as the song itself. Making its world premier on CMT’s Hot 20 Countdown, the video follows Parmalee as disaster strikes and leaves them stranded on a tropical isle where they make friends with another fun-loving crew, which includes well-known songwriter Craig Wiseman. Their behind the scenes video, which debuted on Taste of Country, proves their time on the island was just as much fun in real-life as it appears in the video.
“We handpicked the songs on the Party Pack to be the perfect soundtrack for a good time—whether folks are grilling, chilling or gearing up for a wild weekend,” said Matt Thomas of Parmalee. “We love being able to bring people together for some good old fashion fun and hope people turn it up and enjoy it.”
The Party Pack is a summer-ready six-pack of songs that takes listeners on a journey through a weekend complete with raging parties, morning mimosas, day drinkin’ and solving those morning-after mysteries (like how a car ended up in the pool). Each song in the pack was co-written by lead singer, Matt Thomas including the new brand new tracks, “Last Night” and “These Are The Good Days.”
The band, comprised of brothers Matt and Scott Thomas (lead vocals and drums), cousin Barry Knox (bass) and their best friend Josh McSwain (lead guitar), formed in 2001 as a bunch of small town boys chasing wild weekend nights. Despite their success over the years, which includes award nominations, three consecutive Top 10 singles and the release of two full studio albums, Parmalee has never lost that rowdy energy that built the foundation for their music.

Music editor for Nashville.com. Jerry Holthouse is a content writer, songwriter and a graphic designer. He owns and runs Holthouse Creative, a full service creative agency. He is an avid outdoorsman and a lover of everything music. You can contact him at JerryHolthouse@Nashville.com
Previous Smith & Wesley To Premiere New Video On Heartland
Next “Nashville” Stars Wrap International Tour