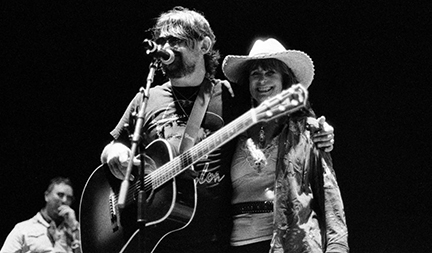 Shooter Jennings and his mother, Jessi Colter at BeachLife. Photo by Emilia Pare

“I’ve been a part of a billion Waylon tribute type things,” Jennings says, “always as more of a representative of it than anything. But, with this idea, (BeachLife founder) Allen Sanford gave me an opportunity to turn around and give people – who truly cared for my dad – an opportunity to give thanks. It touched everyone there on and off stage. BeachLife gave us the perfect setting to really see how much these folks cared for my dad’s music.”

Among the celebration’s many highlights was Jennings and Lukas Nelson’s raucous rendition of their famous fathers’ chart-topping, GRAMMY Award-winning classic, “Mammas Don’t Let Your Babies Grow Up to Be Cowboys” as well as Jennings and Colter’s concert-closing duet performance of Mickey Newbury’s plaintive “Why You Been Gone So Long,” recorded by Colter in 1970 and later featured on the landmark 1976 compilation, Wanted! The Outlaws.

Music editor for Nashville.com. Jerry Holthouse is a content writer, songwriter and a graphic designer. He owns and runs Holthouse Creative, a full service creative agency. He is an avid outdoorsman and a lover of everything music. You can contact him at JerryHolthouse@Nashville.com
Previous Cavefest Artists Spotlight: Sam Bush
Next Jake Scott Coming To Marathon Music Works