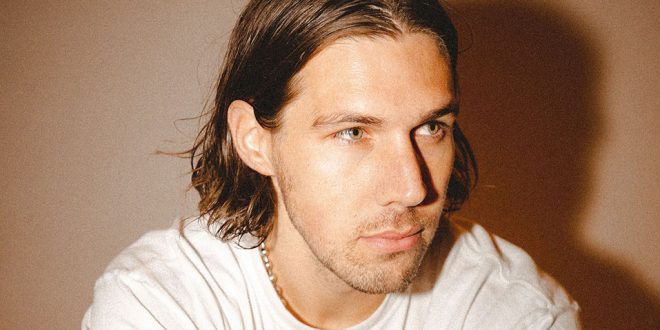 Pop singer-songwriter, producer, and multi-instrumentalist Jake Scott will be bringing his “Lavender Tour” to Nashville on Tuesday, October 25, headlining Marathon Music Works (GET TICKETS HERE.) The upcoming run also follows Scott’s first-ever North American headline tour earlier this year, which completely sold out and required venue upgrades in multiple cities due to popular demand.   Scott recently unveiled his new single “She’s Not You”, along with a companion live performance video (watch above), captured in Los Angeles. Co-written by Scott and co-produced alongside Eren Cannata (Walk the Moon, Tones & I, Jake Wesley Rogers), the love song couples Scott’s sincere songwriting with melodic, guitar-driven beats.   Of the new track, Scott said: “‘She’s Not You’ is the story of finding the perfect person who still can’t compare to the one you lost.”   He continued, “The Lavender Tour is a huge milestone for me. These are the biggest rooms I’ve played yet and I’m so excited about the show we’ve put together. I promise I’m going to give you everything I’ve got!”

Earlier this year, Scott made his national television debut on The Kelly Clarkson Show – performing his anthemic, anecdotal track “Texas Girl” – and was named one of People Magazine’s “Emerging Artists” to watch. Additionally, his 2021 collaboration with multi-Platinum country star Russell Dickerson – “She Likes It” – became RIAA Certified Gold and has amassed 100M+ total streams in the U.S. alone. Along with being a featured artist on “She Likes It,” Scott co-produced, mixed, and co-wrote the song with Dickerson.   Scott recently surpassed 500M+ total career streams and is currently in the studio working on his much-anticipated debut project with Elektra Records.

Music editor for Nashville.com. Jerry Holthouse is a content writer, songwriter and a graphic designer. He owns and runs Holthouse Creative, a full service creative agency. He is an avid outdoorsman and a lover of everything music. You can contact him at JerryHolthouse@Nashville.com
Previous Shooter Jennings Curates All-Star Tribute To Waylon
Next Morgan Wallen Wraps Up Dangerous Tour