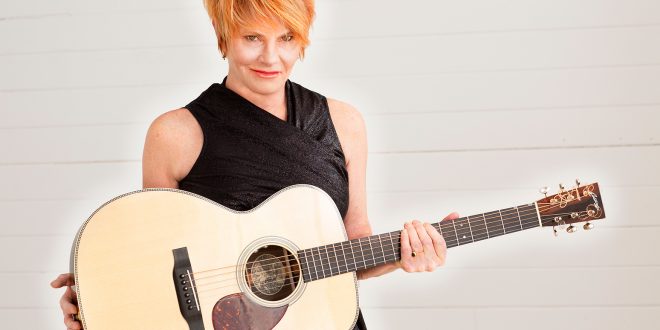 Grammy-award winning singer-songwriter Shawn Colvin has offiicially released the 30th anniversary acoustic edition of her iconic 1989 album Steady On. Fresh off a busy AmericanaFest that included a special album release showcase and was followed by an appearance at Mountain Stage, Colvin is gearing up for a busy fall that includes a long span of tour dates alongside Mary Chapin Carpenter.
The acoustic anniversary edition of Steady On was recorded at Austin’s Arlyn Studios with head engineer Jacob Sciba (Steve Earle, Dierks Bentley, Willie Nelson), mixed by Simon Tassano and mastered by Emily Lazar. The adventure of this stripped-down set lies in its new color palette. Organic and rootsy, Colvin’s voice ripples with edgy maturity, allowing her to excavate deeper meaning from songs she’s played for decades. It’s a captivating listen—distilling the kind of introspective, emotionally honest and deeply moving music Colvin created with the original Steady On.
Now with her daughter of college age and off at school, Colvin has entered a new phase of life that allows freedom to explore. And this involves seeking out more contemporary sounds (often recommended by her daughter), including favorites Beyonce and Frank Ocean. “I describe Frank as Stevie Wonder on another planet,” Colvin says. “He’s deep musically, lyrically and vocally—he takes me somewhere.”
Over the last few decades, Americana has evolved to encompass a myriad of sounds rooted in folk, country, blues, gospel, and rock & roll. And while fans and critics may never agree on exactly how to define it, one thing is certain: It’s a sound borne of our need to express all the hurt and joy bursting from our hearts. Three-time Grammy winner Shawn Colvin stopped the industry in its tracks with her arresting 1989 debut, Steady On. The following spring, Colvin took home the GRAMMY for Best Contemporary Folk Album, legitimizing a burgeoning genre that’s grown ever stronger and richer with time. As the record’s 30th anniversary looms, the trailblazing singer and songwriter readies a truly mesmerizing acoustic reinvention of her breakthrough release, lacing up each track with fresh layers of warmth, charm, and wisdom.
With her wistful revisitation of these well-traveled songs, Colvin’s lyrics come into sharp focus. “You can cry like an angel when there are no words,” she sings, offering an outstretched hand that is at once steady and comforting.“Shotgun Down the Avalanche” intermingles melancholy with the resignation of a failed romance, her world-weary voice nearly whispering the sorrow of being taken down by a broken relationship. “The Story” thumps along the dusty highway of life, telling the “story” about her upbringing and place in the family, written as a talk with her sister—each experience cherished as a badge of honor.
“I was 32 years old, and the dream of my life had been fulfilled,” Colvin says, “not only because I made an album but mostly because I had written or co-written every song, an accomplishment that was hard won. I was so proud. My feeling was then—and still is—that if I never made another album, Steady On would have been enough.”

Music editor for Nashville.com. Jerry Holthouse is a content writer, songwriter and a graphic designer. He owns and runs Holthouse Creative, a full service creative agency. He is an avid outdoorsman and a lover of everything music. You can contact him at JerryHolthouse@Nashville.com
Previous Luke Bryan to Flip The Switch for “Opry Goes Pink“
Next Chuck Dauphin, Beloved Music Writer And Radio Host, Passes