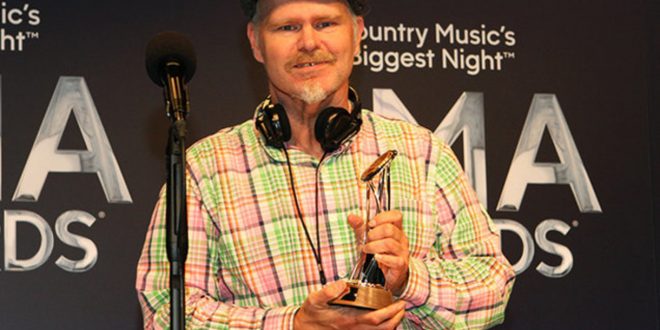 CMA Award-winning journalist Chuck Dauphin died at 6:47 PM CT on Wednesday, Sept. 18, at Nashville’s Alive Hospice following a series of complications from diabetes. He was 45.

Born Charles Frederick Dauphin, III, on Feb. 17, 1974, in Dickson, Tenn., he was destined for a life in country music. Those who had the honor to know him will remember him as being a faithful Christian, a devoted son, a loving stepfather, a fiercely loyal friend and one of country music’s greatest journalists.

“We are so proud of Chuck,” Dauphin’s father, Charles F. Dauphin, Jr., says. “He accomplished so much and was loved by so many. Our deepest thanks to everyone who showed their love to Chuck. We know he felt your prayers and support.”

Growing up in Tennessee, country music was always in the ether for Dauphin. His mother, the late Frankie Paulette Dauphin, doted on her son and raised him on the music from her vast record collection. His father took him to Nashville’s CMA Fest annually and would regularly carpool him to town to shop for music at The Great Escape and Tower Records.

Dauphin’s childhood dream of becoming a professional radio host was realized in 1991 during his junior year in high school when he earned his first job in the music business at WDKN in Dickson, Tenn. He worked there for 18 years, rose to program director and was known to everyone in Dickson County by his on-air personality, “Crazy Chucky.” He enjoyed a flourishing radio career with stops at WNKX in Centerville, Tenn., Nashville’s venerated WSM-AM, and he often appeared as a guest on Sirius XM’s country channels.

Dauphin’s comprehensive knowledge on country music and his impact on the genre are immeasurable. He was indeed a savant with a byline that has been featured in At Home Nashville, CMA Close Up, Country Now, Rolling Stone, Roughstock, Sounds Like Nashville, The Boot and The Dickson County Herald.

From 2011 until his death, he was a principle country music contributor at Billboard. While his holy trinity of favorite artists will always be Garth Brooks, Kenny Rogers and Randy Travis, Dauphin rarely turned down the opportunity to interview a new act, and he always championed the classic country greats, who were the official soundtrack of his life. He was among the first music journalists to champion some of today’s most famous entertainers; his words on artists including Ashley McBryde, Brandy Clark, Brantley Gilbert, Carly Pearce, Cody Johnson, Luke Bryan, Luke Combs and Midland helped make them stars.

“His interviews got down to what was important to that person,” journalist and longtime friend Deborah Evans-Price says. “Whether he was covering sports or country music, he had the innate ability to celebrate the person and their craft. He knew how to pull out the best in every interview to the point where readers always felt like they knew the subject intimately from his writing.”

When Dauphin wasn’t on a red carpet, behind a microphone at a radio station, or reporting live from an event, he worked behind the scenes as a regular ghostwriter for many publicity firms across the country.

His tireless work ethic and zeal to advance country music internationally were recognized in 2014 when he received the prestigious CMA Media Achievement Award.

He was preceded in death by his mother, his grandparents Ernest and Pauline Clymer, Charles and Edna Dauphin, two uncles Jim Chaplin and Del Roberts, an aunt Peg Dauphin and a cousin, Douglas Harbers, and many beloved pet dogs and cats, including Lassie, Brownie and Chloe.

Memorial service and funeral information will be announced later this week via http://www.taylorsince1909.com or https://www.burnschurchofchrist.org.

In lieu of flowers, his family asks that donations in Dauphin’s name be made to Music Health Alliance, MusiCares, Alive Hospice, The Opry Trust Fund and/or Nashville Humane Association.

Chuck Dauphin, mini-bio:
Chuck Dauphin’s award-winning career stretched across the worlds of music journalism, sports coverage, record promotion and radio broadcasting. He was a country music historian whose admiration for the genre’s songwriters helped fuel his own writing, as seen in his 1,000+ articles for outlets like Billboard Magazine, CNN, Rolling Stone, and The Tennessean. Hired by Billboard in 2011 to serve as the company’s Country News Editor and The 615 columnist, he won the CMA Media Achievement Award in 2014, with then CMA Vice President of Corporate Communications Wendy Pearl praising his “preparation, creativity, integrity, and passion for country music.”

Born just outside Nashville in the small town of Dickson, Tenn., Dauphin remained loyal to his home state throughout his life. He served as a radio personality for regional radio stations like WNKX in Centerville and WDKN in Dickson, earning the on-air nickname “Crazy Chucky” along the way. During his final years, he also became the radio voice of Hickman County football, shining a light on the community’s young athletes.

Despite his many health battles, Dauphin remained an active journalist and radio personality through the summer of 2019. His final articles included pieces on longtime friends like Randy Travis and Vince Gill.

Enjoy praise for Dauphin’s contributions:
“If ever you needed a friend… or a kind word… you could count on Chuck Dauphin. A gentleman through all the years of my career, who always focused on the best in everyone. Chuck was a gift to this world and leaves us all better because he crossed our paths. Rest now in peace and perfect health, Brother Chuck — Forever and Ever, Amen.”  — Randy Travis

“There will never be anyone like you again, and I want you to know that all of us in the business appreciate what you have done for us and our careers. I will miss you more than you know as I am sure everybody will.” — Kenny Rogers

“What an honor and privilege it is to be counted among your friends. Alicia and I know it’s been a tough road but you are a tough guy.  We love you and appreciate your friendship and sharing your gifts, life and smile with us.” — John Schneider

“You have always been a pro even when you were young. I never hesitated to invite you to anything I was doing because I knew how respectful you were of everybody. I’ve watched your career grow and read your articles and felt the love you had for the music and the artists behind it. Please tell George Mac, ETC how much I miss them. We’ll get together again someday. Love you.” — Keith Bilbrey

“I have lost a good friend, but the music industry has lost one of its great champions. Music was his whole life. He ate, drank and slept country music. He was a kind and gentle man who always supported the legends in our business as well as the new artists just starting out. Rest in peace, my friend.” — TG Sheppard

“Chuck was always a sweetheart. Positive vibes and a total pro. Thanks for all the kind words. Rest easy, pal.” — T. Graham Brown

“Chuck is the definition of a pro who invites you in to be vulnerable and honest. That is a secret ingredient that makes a true savant in the world of overdone cover stories. One of the nicest and most compassionate individuals in the press world.” — Tim Rushlow

Music editor for Nashville.com. Jerry Holthouse is a content writer, songwriter and a graphic designer. He owns and runs Holthouse Creative, a full service creative agency. He is an avid outdoorsman and a lover of everything music. You can contact him at JerryHolthouse@Nashville.com
Previous Shawn Colvin Releases Anniversary Acoustic Edition Of “Steady On“
Next Grandson Of Hank Willams Invited To Make Opry Debut