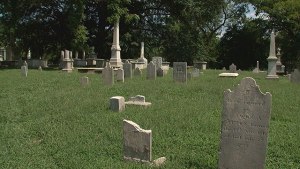 Search Still On for Vandals of Historic Tombstones at Nashville Cemetery

Vandals did quite a number on a historic Nashville cemetery, vandalizing more than a dozen fragile headstones and grave markers.

Some of the most notable figures in the city’s history, including two of its founders, are buried there. At the City Cemetery just south of downtown, there’s a museum where anybody that’s somebody is buried.

But vandals had no mercy on those resting in peace.

“You are attacking a dead person. What good is that going to do anyone?” Hoobler questioned.

Over the weekend, 18 tombstones were vandalized.

“To vandalize something that belongs to all of us, this is a city park, that’s just absolutely asinine,” Hoobler said.

Hobbler has a love for history and spent Labor Day up-righting what headstones he could.

“Here’s another tombstone they knocked down,” he said.

Hobbler was in disbelief when he saw so many toppled.

“To vandalize something like this you really have to wonder where the head and heart of the person are,” he told News 2.

During Mayor Bill Purcell’s administration, the city council voted to allocate nearly $2 million to restore City Cemetery, including adding fencing around the perimeter and better lighting for security.

Hobbler is hoping the history of vandals desecrating graves doesn’t repeat itself.

“There’s only speculation about who would do something like this, either someone is intoxicated or someone who’s mad for some reason, or some dumb teenager,” he said.

If you have any information that could be helpful in the investigation, call our partners at Nashville Crime Stoppers 615-74-CRIME.