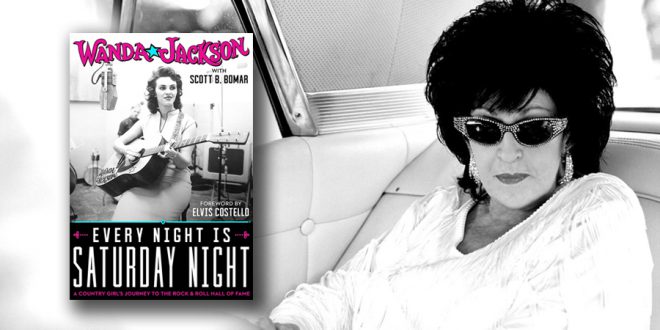 BMG has announced it will release legendary rockabilly and country music pioneer Wanda Jackson’s autobiography Every Night Is Saturday Night: A Country Girl’s Journey to the Rock & Roll Hall of Fame on November 14, 2017. The iconic performer known as the “Queen of Rockabilly” and the “First Lady of Rock & Roll” landed more than thirty singles on the country and pop charts between 1954 and 1974. Featuring over eighty photographs from her personal collection and a foreword by Elvis Costello,Every Night is Saturday Night is the rockin’ great-grandmother’s chance to finally share the story of her fascinating life and career in her own words.

Jackson’s debut single, “You Can’t Have My Love,” reached the Top 10 while she was still a sixteen-year-old high school student. She hit the road after graduation, playing package shows with Carl Perkins, Johnny Cash, Jerry Lee Lewis, and Elvis Presley, who gave Wanda his ring and asked her to be “his girl.” With Presley’s encouragement, the Oklahoma native began recording rock music, often releasing singles with country on one side and rock on the other during her decade-and-a-half tenure on Capitol Records.

Known for her energetic stage shows and pioneering presence as a female artist, Wanda stormed the charts with a series of hit singles, including “Let’s Have a Party,” “Right or Wrong,” and “In the Middle of a Heartache.” With over 40 albums to her credit, Wanda has proven to be an enduring and genre-defying legend of American music.

In Every Night is Saturday Night, Wanda tells the story of being discovered by Country Music Hall of Famer Hank Thompson; why she refused to return to the Grand Ole Opry for more than fifty years; the challenges she and her integrated band, The Party Timers, faced when touring in a less racially tolerant era; personal memories of her relationship with Elvis; and how she ultimately found the love of her life.

Along the way, Wanda reveals details about her first boyfriend, who went on to become a well-known pioneer of country music’s Bakersfield Sound; how she launched the career of country star Roy Clark; the challenges she faced as a woman who introduced sex appeal to country music and growling femininity to rock & roll; her recent work with rock luminaries such as Jack White and Joan Jett; and how her deep faith has sustained her over more than seven decades of rocking, shocking, and thrilling audiences around the globe.

Wanda will launch the book with several public events and book signings around its release, including Tuesday, November 14 at the GRAMMY Museum in Los Angeles and Saturday, December 2 at the Country Music Hall of Fame and Museum in Nashville.