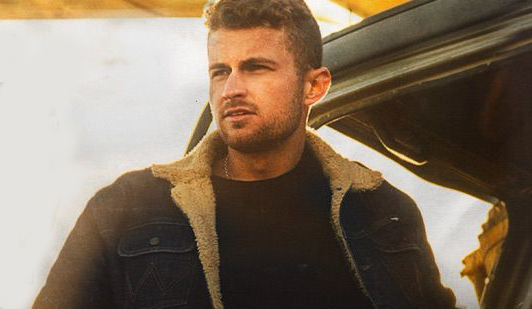 Rising star Sean Stemaly’s debut album, PRODUCT OF A SMALL TOWN, is dropping on February 18, and to celebrate, he’s performing a free show at Jason Aldean’s Kitchen + Rooftop Bar downtown where he’ll be playing his new songs for friends and fans with a few surprises in store. Doors are at 6pm CT and the show starts at 8pm.

Sean Stemaly was born in Western Kentucky and raised in the river-bottom fields of Southern Indiana, a hard-worker whose Country music comes straight from the only life he knows. Stemaly taught himself to sing in the cab of a Case IH 9370 tractor, with influences like Brooks & Dunn, George Strait, Alan Jackson and Jason Aldean. Signed to Big Loud Records, the 27-year-old singer has tallied over 113 million on-demand artist streams in the US. the new album was produced by Joey Moi and includes fan-favorites “Z71,” “Come Back To Bed” and “As Far As I Know.” The 2021 Pandora Country Artist to Watch has already hit the road with Riley Green, HARDY, Morgan Wallen and Justin Moore among others, and has exciting touring plans for 2022 to be announced soon.

Music editor for Nashville.com. Jerry Holthouse is a content writer, songwriter and a graphic designer. He owns and runs Holthouse Creative, a full service creative agency. He is an avid outdoorsman and a lover of everything music. You can contact him at JerryHolthouse@Nashville.com
Previous Dolly Parton To Host 57th ACM Awards
Next Kellie Pickler To Host SiriusXM’s The Highway