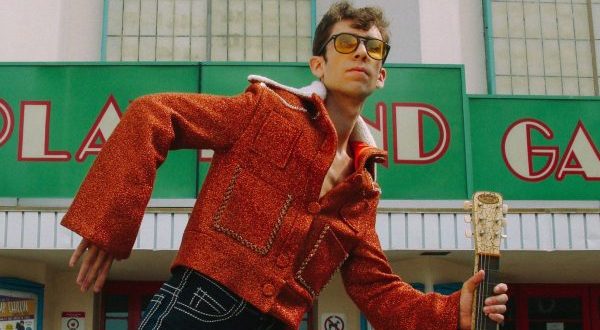 “It was always a dream of mine to shoot a music video in my family’s pawn shop ‘Sam’s Swap Shop’ in uptown Kingston, NY the place I was named after. My grandpa Lonnie gave me my first guitar from the store so naturally I wanted the story to focus around a guitar, in this case it’s a 1963 Danelectro Convertible that came from Sam’s (a dream guitar of mine). The guitar represents lost love, regret, but also a fresh start. The store closed soon after filming and I still can’t watch the video without crying, but my grandpa always said “Tell it like it is” and I think we did that. Bravo to Jeff Mertz for capturing the legend of Sam’s and to my dad who blew me away with his acting.” said Kogon.

The video was directed by Jeff Mertz and here’s what he had to say about the project: “Sam and I came up with the concept sort of organically. We knew pretty early on we wanted to shoot inside the Kogon family pawn shop, especially as it was slated to close for good within the year. As we were figuring out exactly what the story would be, I was struck by the persistence of Sam’s name through generations of his family – every family member who came to run the shop took on the mantle of ‘Sam’. It felt like there was this sort of mythos to the name, so there’s all these easter eggs throughout the video – the portraits on the shop walls, the gravestone, the last shopkeeper (played by Debbie ‘Sam’ Kogon) are all ‘Sams’. The shop itself was also charged with nostalgia, so the story kind of naturally evolved into being about an older Sam Kogon (played by Lou, Sam’s dad) who’s reflecting on missed opportunities and regret, but is ultimately given a second chance, which he proudly takes. I actually ended up moving to Kingston, NY, where the video was shot, a few years later, and it’s a little surreal to witness the rabid gentrification that ultimately supplanted Sam’s Swap Shop with a bland art gallery, but I’m grateful to have captured a small slice of local history while it was around. The video itself feels like a sort of second chance for the shop and the myth of ‘Sam Kogon,’ wherever in time we may find them.”

Kogon briefly sang lead vocals in the reformed 1960s group The Left Banke in 2015 — in their heyday, The Left Banke had a big Billboard chart hit with “Walk Away Renée.” Since that gig, Sam has been working on his own music.

Nashville is not yet on the tour schedule but we’re hoping that will change soon.

Music editor for Nashville.com. Jerry Holthouse is a content writer, songwriter and a graphic designer. He owns and runs Holthouse Creative, a full service creative agency. He is an avid outdoorsman and a lover of everything music. You can contact him at JerryHolthouse@Nashville.com
Previous LISTEN: Matt Jordan’s “Heart of the Heartland”
Next Momentum Continues For Dustin Collins With New Signing