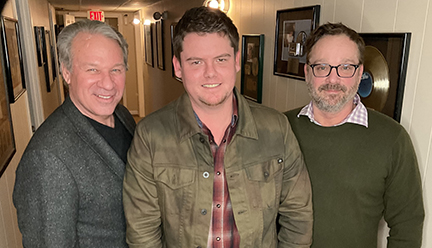 Kraski began his career in sales and distribution at CBS Records and eventually made his way to Sony Music Nashville, where he worked with Dolly Parton, Johnny Cash, Montgomery Gentry among many others, and was eventually elevated to executive VP and general manager for the Nashville division. In 2003, Kraski left Sony and launched an artist friendly label that was aptly named Equity Records. As President and CEO, he launched the career of Little Big Town. Since 2007, Kraski has worked in artist management, consulting and music publishing at Tenacity Management and at M-Pact Music Group and recently partnered with legendary artist manager John Dorris to launch New Vision Artist Management.

Solima, whose career started at Music Matters, who managed Tracy Lawrence (16 of 17 singles were all No. 1) and Clay Walker (debut single No. 1), opened the multi-award-winning Hitsquad Promotions in 1993. In 2006, he co-founded New Revolution with partner Rob Dalton, and in 2008, he co-founded Bigger Picture Promotions with partner Michael Powers. Bigger Picture became the No. 5 record label in 18 months, setting the No. 1 record at the time of 9 consecutive No. 1 singles, and launched Craig Campbell, Chris Janson, and relaunched Chris Cagle, Uncle Kracker’s “Smile,” and Kid Rock. New Revolution clients have included Tim McGraw, Brantley Gilbert, Martina McBride, Lee Brice, Gloriana, Uncle Kracker, Jesse James Decker, among others, while delivering Emerson Drive’s only No. 1 with “Moments” and relaunching Big & Rich with four consecutive Top 15 singles.

“It’s truly amazing to get to work with some of the best that Nashville has to offer. Management wise, Mike has helped me achieve everything I’ve wanted to on my new project and going forward to radio, you can’t help but to be impressed with Jeff’s track record of success and professionalism,” shared Collins.

Produced by industry veterans Buddy Cannon and Bill McDermott, Working Man is slated for release this summer from DCDL Entertainment. A portion of proceeds from the lead single and album will benefit GUMI (Glad You Made It) Camp USA. GUMI focuses on providing U.S. veterans with the tools they need to help them heal after deployment overseas and enable them to re-enter society.

Music editor for Nashville.com. Jerry Holthouse is a content writer, songwriter and a graphic designer. He owns and runs Holthouse Creative, a full service creative agency. He is an avid outdoorsman and a lover of everything music. You can contact him at JerryHolthouse@Nashville.com
Previous Sam Kogon Premieres “Barbed Wire” Video On Nashville.com
Next Trace Adkins Wows The Daytona Crowd