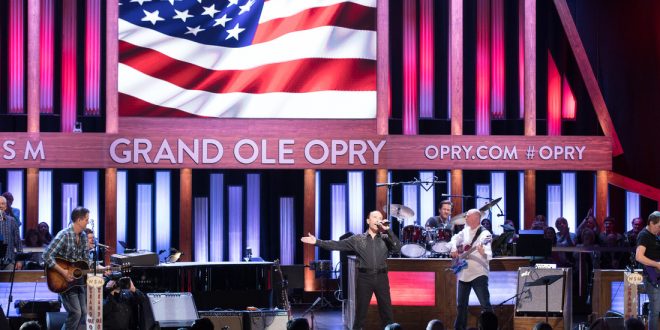 “Salute the Troops” at the Opry May 21

The show that made country music famous is scheduled to salute the U.S. Military with an annual red carpet parade and special Salute the Troops Opry performance Tuesday, May 21. Among the artists scheduled to perform are Trace Adkins, Brantley Gilbert, Lee Greenwood, Craig Morgan, The Wild Feathers, and Mark Wills.

95-year-old World War II sailor Ernie Andrus is set to lead the red carpet parade of fellow military men and women into the Opry House before the evening’s performance. In 2016, Andrus became the oldest person ever to run across America, journeying from San Diego, California to Saint Simons Island, Georgia. Last month, he began a second run across the country, beginning in Georgia with a planned finish in California after his 100th birthday. Andrus is running to raise money and awareness for the LST 325 Ship Memorial in Evansville, Indiana. While 1,051 LSTs (landing ship tanks) were built during World War II, only the 325 is fully restored, operational, and open for tours.

The Opry and the United Service Organizations (USO) will invite men and women of the U.S. military as well as spouses, children, and parents of service members to follow Andrus on the red carpet into the Opry House for the evening’s show, dedicated to saluting the troops and their families for their service to the nation.

The public is invited to cheer on the honored red carpet parade guests in advance of the evening’s show which starts at 7 p.m.

Music editor for Nashville.com. Jerry Holthouse is a content writer, songwriter and a graphic designer. He owns and runs Holthouse Creative, a full service creative agency. He is an avid outdoorsman and a lover of everything music. You can contact him at JerryHolthouse@Nashville.com
Previous Parachute Returns To Nashville May 18 At Cannery Ballroom
Next Craig Morgan Returns From Eleventh USO tour