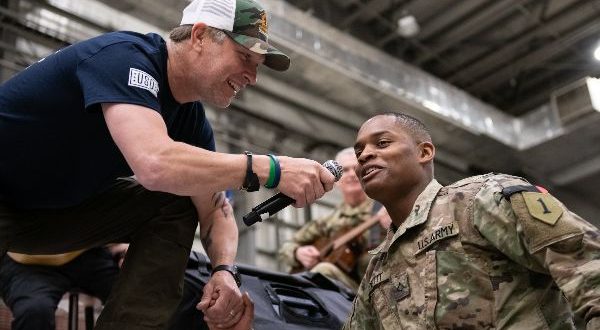 This trip marked Morgan’s eleventh USO tour and fourth with the Vice Chairman, having last traveled with him on an eight-day, seven country USO tour in March 2018. Morgan first volunteered with the USO in 2002 and is a USO Merit Award recipient who has gone on to participate in eleven USO tours, where he has entertained more than 45,000 service members and military families in 15 countries.  Among the locations Morgan has visited with the USO are the U.S., Guam, Japan, Afghanistan, Iraq, Kuwait, Greece, the United Kingdom, Portugal, Spain, Diego Garcia, Qatar, Italy and the Korean Peninsula where the singer was once stationed.  Prior to making it big on the country music scene, the singer/songwriter spent more than 10.5 years of service in the U.S. Army and an additional 6.5 years in the U.S. Army Reserves.  This marks his eleventh tour abroad with the USO and his sixteenth overseas tour for our troops.

A multi-faceted entertainer, Craig Morgan has made a name for himself as a country music icon, TV personality, celebrated outdoorsman and patriotic Army veteran. One of country music’s best-loved artists, Morgan has charted 25 songs on Billboard and thrills massive crowds with signature hits including “Bonfire,” Almost Home,” “Redneck Yacht Club,” “International Harvester,” “This Ole Boy,” Wake Up Loving You” and the four week #1, “That’s What I Love About Sunday.”

Craig received one of country music’s highest honors when he was inducted as a member of the Grand Ole Opry in 2008. Prior to becoming a country music star and TV sensation, Morgan spent seventeen years serving our country in the Army and Army Reserves. Morgan remains an avid supporter of America’s military personnel and has made 15 overseas trips to perform for our troops. He is a recipient of the 2006 USO Merit Award and in 2018 was awarded the Army’s Outstanding Civilian Service Medal, one of the highest awards the Department of the Army can bestow upon a civilian, in recognition of his significant dedication to our military men and women around the world.

In 2017 Craig debuted The Gallery at Morgan Farms, a family-owned and operated farm-to-home business in his hometown of Dickson, TN. The store features a variety of artisan items handmade by Craig and his family and shoppers can also order his custom blended Old Tattoo Cabernet Sauvignon, in partnership with Lot18.com.

Music editor for Nashville.com. Jerry Holthouse is a content writer, songwriter and a graphic designer. He owns and runs Holthouse Creative, a full service creative agency. He is an avid outdoorsman and a lover of everything music. You can contact him at JerryHolthouse@Nashville.com
Previous “Salute the Troops” at the Opry May 21
Next CMA Fest Announces More Performers