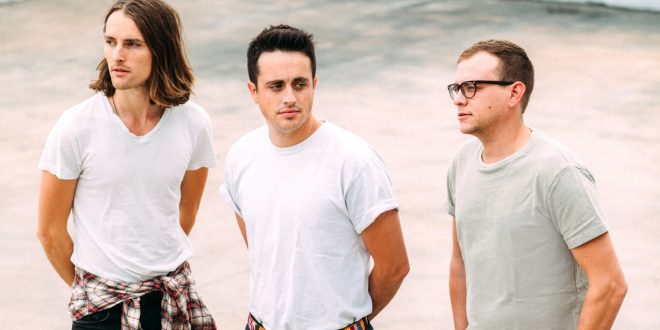 Parachute Returns To Nashville May 18 At Cannery Ballroom

Forming when they were still in high school, Parachute’s Will Anderson (vocals, guitar), Johnny Stubblefield (drums), and Christopher “Kit” French (saxophone, keyboards) have proven to have a deep affinity for classic pop, heartfelt rock, and tuneful soul. Now, after a decade of writing, recording and touring across the globe the threesome will release their fifth studio album and debut for Thirty Tigers on May 10 with a 40-plus city tour planned including a stop May 18 at Cannery Ballroom in Nashville. Tickets available here.
There’s a subtle power to the music of the Charlottesville-bred Parachute. With their open-hearted songwriting and indelible melodies, the trio reveals a rare ability to pack deep layers of feeling inside the most immediately catchy pop track. And on their new self-titled full-length they bring that dynamic to a batch of songs exploring everything from love and loss to anxiety and regret, handling each with extraordinary attention to life’s most nuanced moments and intricate details.
On their upcoming new album, an intimacy echoes as Parachute unfolds with a more artfully minimalist sound than they’ve ever embraced before. In creating the collection, the band worked closely with producer Jacquire King (Kings of Leon, James Bay, Dawes), reshaping their decidedly pop demos into songs adorned with raw instrumentation and graceful electronic flourishes. “From the beginning, we intended to simplify everything and keep the songs as stripped-back as we could,” says Anderson.
On the album-opening lead single “Young,” Parachute offer up a wistful meditation on getting older, embedding the track with delicate beats, elegant horns, and Anderson’s stirringly self-aware lyrics (e.g., “After all this growing up/I’m only good at being young”). The first song Anderson penned for Parachute, “Young” came to life at a time of monumental transition. “We’d just gotten off the road, and I’d sold all my stuff and moved from Nashville to New York to be near my then-girlfriend, now-wife,” Anderson recalls. “The song just spilled out of me one day, and it came from a place of feeling terrified of growing up but also wanting to get to the point of feeling more settled in my life, and not so out at sea.”  On the piano-laced “Ocean,” meanwhile, Parachute look back to the period of time before Anderson moved to New York, brilliantly channeling long-distance longing in a hypnotic back-and-forth between hushed intensity and full-tilt expression of lovestruck desire. Next, the piano-led and harmony-rich “Had It All” embodies a different kind of reflection, with Anderson transforming regret into a tender piece of soul-pop. “Writing that song, I put myself back in one of those situations from my past where I’d messed up and hurt somebody,” says Anderson. “It’s sort of my big apology into the unknown, a way of getting out what I’d say to them now if I ever got to see them again.”
Parachute takes on a more triumphant mood on songs like “Finally Got It Right,” a brightly textured track capturing the joyful relief that Anderson felt in finding the love of his life. Elsewhere on the album, the band shows their sophisticated sonic range, diving into Latin-flavored acoustic pop on “Talk To Me” and serving up an unstoppable groove on the deceptively upbeat “Dance Around It.” To close out the album, Parachute delivers a quietly luminous track that stands in stark contrast to the breezy feel of “Young.” Written soon after Anderson and his wife relocated to San Francisco, “Looking Back” gently telegraphs the undeniable ache of missing the life you’ve left behind.
The band’s inaugural release in 2009 debuted at #2 on the Billboard Digital Albums chart and climbed to #40 on the Billboard 200. Over the next few years, along with releasing The Way It Was and Overnight (which shot to the #3 spot on iTunes). Now, after a decade of touring internationally and turning out songs like “She Is Love” (#1 at iTunes), the gold-certified “Kiss Me Slowly,” “Forever and Always,” and the infectious smash single “Without You” (from 2016’s Wide Awake.) The men of Parachute have racked up a considerable amount of roadwork and honed their combustible musical chemistry and j ust like the songs on the albums they bring their passion to every live set.

Music editor for Nashville.com. Jerry Holthouse is a content writer, songwriter and a graphic designer. He owns and runs Holthouse Creative, a full service creative agency. He is an avid outdoorsman and a lover of everything music. You can contact him at JerryHolthouse@Nashville.com
Previous 10th Annual Darius and Friends Concert And Benefit Set For June 3
Next “Salute the Troops” at the Opry May 21