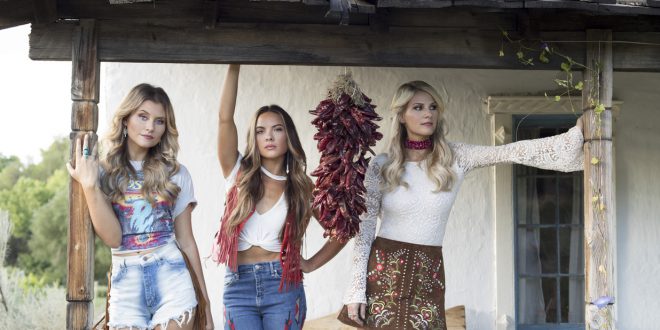 Wheelhouse Records act Runaway June rides into the Top 40 at Country radio this week with “Wild West,” its latest single, which fuses the group’s spellbinding vocals and tip-of-the-hat to timeless love. The trio continue to shatter a decade old record as Naomi Cooke, Jennifer Wayne and Hannah Mulholland become the first all-female trio in over a DECADE to score two consecutive Top 40 hits (source: Mediabase Country Chart). Its first single “Lipstick” went on to become a Top 25 hit.
Already lauded “one of the best songs of 2017” the official video for “Wild West” is available now. Watch the trio head back to the gritty ‘Wild West,’ fearlessly dueling with villains in the Santa Fe desert HERE.
No stranger to the stage, the red-hot group has recently been hand-selected to perform with a slew the genre’s most legendary acts. This past weekend, the group supported Alan Jackson on his anticipated Honky Tonk Highway Tour (2/8, 2/9). Additionally, after wrapping a nationwide run on CMT On Tour Presents: Jon Pardi’s Lucky Tonight Tour with Midland, the band was invited by Garth Brooks to support a year-end Bridgestone Arena show, propelling him to declare Runaway June as one of his favorite new artists at a Country radio event weeks later.
Runaway June is currently in the studio with revered producer Dan Huff working on its debut album for Wheelhouse Records, due out later this year.