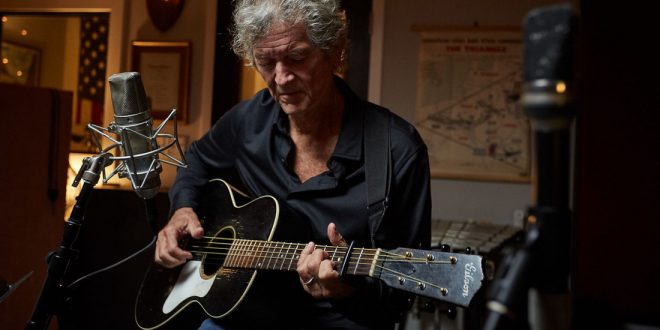 Rodney Crowell is the latest to join the LR Baggs Presents series with material from his new album, TEXAS, out August 15th. Rodney met up with LR Baggs at Dan Knobler’s Goosehead Palace Studio to perform acoustic versions of “Treetop Slim and Billy Lowgrass”, “The Border”, and “Flatland Hillbillies”.

Rodney Crowell is using an LB6, accompanied by Eamon McLoughlin on violin using an LR Baggs violin pickup, and Hannah Sutherland on backing vocals. The session was directed and edited by Mike Luckett, with camera work by Dave Johnson, and audio mixing by David Brubaker.

These tracks come from Rodney Crowell’s newest album from his own RC1 Records, TEXAS. He turns his emotional focus to the colorful Lone Star culture and the romance of regional music that formed his musical sensibility. TEXAS, which Crowell co-produced with Ray Kennedy, seeks to replicate the sound of that era. Featuring Willie Nelson, Lyle Lovett, Ronnie Dunn, Billy F Gibbons, Randy Rogers, Vince Gill, Lee Ann Womack, Steve Earle, Ringo Starr and more, the 11 tracks on TEXAS represent not just a fresh batch of weathered poetry from one of Americana’s finest craftsmen, but also an iconic singer-songwriter letting loose with his friends.

“For the last few years, I’d been writing Texas-centric songs and revisiting some of my tunes from as far back as the mid-seventies,” Crowell explains. “Last year, I started referring to the collection of songs as the TEXAS album.”

Music editor for Nashville.com. Jerry Holthouse is a content writer, songwriter and a graphic designer. He owns and runs Holthouse Creative, a full service creative agency. He is an avid outdoorsman and a lover of everything music. You can contact him at JerryHolthouse@Nashville.com
Previous New Randy Travis Single From The Warner Archives
Next Old Salt Union Releases 4th Studio Album