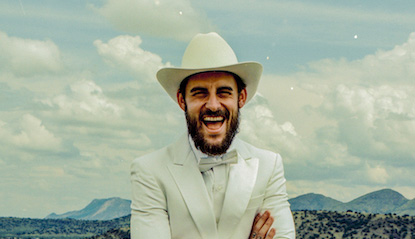 Robert Ellis Is Back With Texas Piano Man

Robert Ellis is set to return with Texas Piano Man on Valentine’s Day 2019 via New West Records. The 11-song set was co-produced by Ellis and Niles City Sound (Leon Bridges) in Fort Worth, TX and is largely comprised of songs written by Ellis, an accomplished guitarist, on grand piano. Texas Piano Man follows his critically acclaimed 2016 self-titled LP. Its single “California” was placed at #23 on NPR Music’s “Top 100 Songs of 2016,” with the outlet calling him “one of Americana’s most innovative young stars,” and the song “pure pop genius.” A wild and spirited album, the grandiose Texas Piano Man presentation – vocals that soar, pumping piano vamps that call to mind Leon Russell and Elton John — finds an intriguing bedfellow with lyrical and thematic content that are disarming for their sincerity. A larger projection of Ellis’ wilder inclinations, the tone of the record can swing like moods during the course of a day. Putting down his guitar and sitting at a piano awakened something, and Ellis likens the musical experience to being behind the wheel of “a rock solid muscle car.” It’s a heavy thing, with beautiful lines.

NPR Music previously premiered Texas Piano Man’s lead off song, “Fucking Crazy” while Rolling Stone Country premiered its accompanying video for the track (see the video above.) The Erica Alexandria Silverman-directed video was was shot in Marfa, TX and depicts a crazed couple’s adventures with a hostage in tow. The song itself finds that two people’s jagged parts sometimes fit together perfectly.

Music editor for Nashville.com. Jerry Holthouse is a content writer, songwriter and a graphic designer. He owns and runs Holthouse Creative, a full service creative agency. He is an avid outdoorsman and a lover of everything music. You can contact him at JerryHolthouse@Nashville.com
Previous Three Holiday Releases from Nashville America Records
Next Dustin Lynch Raises $25,000 For Local Children’s Charities