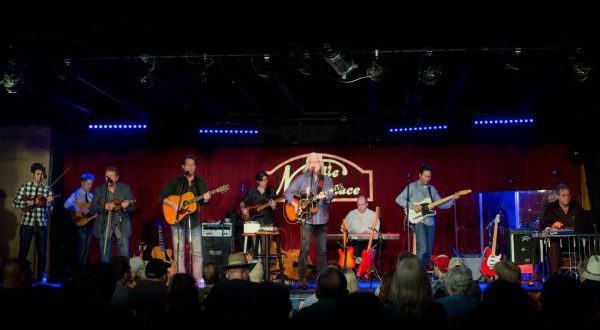 Country music legend Ricky Skaggs wowed a sold-out honky tonk crowd in Nashville last Saturday night.  For the first time in 20 years, Skaggs plugged-in his electric guitar and joined his band onstage at the Nashville Palace for a two-hour live concert featuring the hit country songs that made him famous.
The 15x Grammy winner blistered through hit after hit including “Heartbroke,” “Highway 40 Blues,” “Uncle Pen,” “Country Boy,” “Honey (Open That Door),” “I Don’t Care,” and “Lovin’ Only Me,” among many others.  Skaggs also performed “Somebody’s Praying” and dedicated it to Houston and the other areas in Texas affected by Hurricane Harvey.  The country legend and his band were met by several standing ovations.
“I wanna thank everyone who came out to the Nashville Palace last week,” says Skaggs. “I hope you all enjoyed it as much as I did.  It was so great to sing those old country hits. Let’s do it again real soon!”

Previous Chris Young Reveals Track List For ‘Losing Sleep’
Next Celebrating the Past, Embracing the Future With Conductor Gregory Wolynec and the Gateway Chamber Orchestra Through Wine and Music