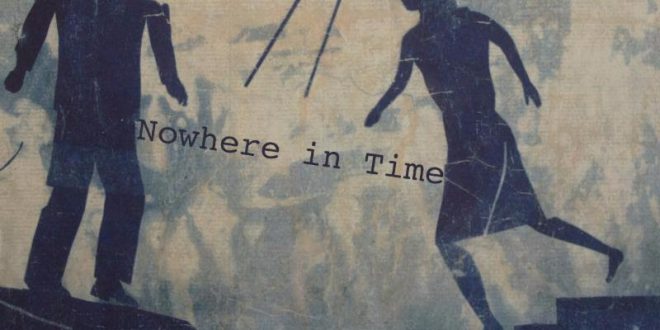 Last Friday, Richie & Rosie, the power duo known for their unique harmonies and unmatched talent, released their second full-length record, Nowhere in Time. The release was welcomed with critical acclaim from publications like No Depression, who called the album “an invigorating mix of the traditional with the ethereal.” Folk Radio describes the record as, “well-balanced, with a mix of songs and tunes that give a very clear picture of who Richie and Rosie are and what they are about.” Vents Magazine premiered the video for the title track last Friday. Richie & Rosie are currently touring the East Coast.
After three years of touring and writing, the duo returned to the studio last December to record Nowhere in Timewith producer Alex Perialas at Pyramid Sound Studios. The album highlights the incredibly-refined skill of both musicians — and while the majority of the album is a simple combination of fiddle, banjo, and captivating melodies, the duo manages to pack an incredibly full sound. “At the beginning, we were thinking it might be a project with lots of other people involved, more of a big production. As we went through it, we realized that the magic lies within the duo. We have an intimacy of music and we feel the power of two people playing. That’s who we are,” said Rosie.
Nowhere in Time is preceded by the band’s first album, Tractor Beam, released in 2013. Before meeting at Saratoga Springs’ Flurry festival and ultimately collaborating, the two were established musicians in their own right. Rosie toured as a member of The Pearly Snaps and was touring with The Mammals before graduating high school. Richie, president of the famed GrassRoots Festival of Music & Dance, performed around the world with bands like Bela Fleck, Pete Seeger, David Byrne, Billy Bragg & Wilco, Old Crow Medicine Show, and Joan Baez. His endless discography includes three Natalie Merchant records, multiple collaborations with Jim Lauderdale and Donna The Buffalo, and Carrie Rodriguez.
Nowhere in Time gives fans a look inside the band’s personal lives, with a variety of introspective lyrics. While some songs are more light-hearted, like “Honey Bee”, which Richie wrote to “lure” his girlfriend back to the East Coast, others face more serious topics. Rosie stepped out of her comfort zone for one of the few lyrical co-writes between the two, “No Longer Lonely”, to write about a close friend passing away. But perhaps the most interesting story on the album lies within the title track, which Richie wrote after receiving an unexpected phone call from the AARP, requesting that he write a song about ‘life after 50’. “They set up a recording date for the song before it was even written. So I’m sitting in my living room, crumpling up paper and trying to write a song about reinventing yourself after 50. I thought, ‘I’m going nowhere with this’,” Richie says about the song that turned into appreciating the present, “That’s what the song was actually born out of. You can look back and look forward, but we aren’t done with life, we’re just where we are. It’s about focusing on the moment.”
Ironically, the commissioned song became one of their most well-received songs and defined exactly what the duo hopes to achieve — music that many can connect with. With the fated combination of Richie & Rosie’s unique skill, varied musical influence, and honest storytelling, Nowhere in Time does just that. As two musicians in two very different parts of life, Richie & Rosie are proof of two things: the power and magic of two people making music, and that the universal messages that lie within their songs will remain timeless.
Tour Dates:
November 24 – Ithaca, NY – The Haunt
December 8 – Nashville, TN – New Roots Exchange
December 14 – Philadelphia, PA – Philadelphia Folksong Society
December 15 – Wakefield, RI – Pump House Music Works
December 16 – Saratoga Springs, NY – Caffe Lena
December 17 – Nashua, NH – Riverwalk Cafe & Music Hall
December 19 – Waterbury Center, VT – The Zenbarn
January 19 – Brooklyn, NY – House of Love
January 20 – Rosendale, NY – Rosendale Cafe
For more information, visit www.richieandrosie.com. For review copy, contact sarahbennett@thepresshouse.com.