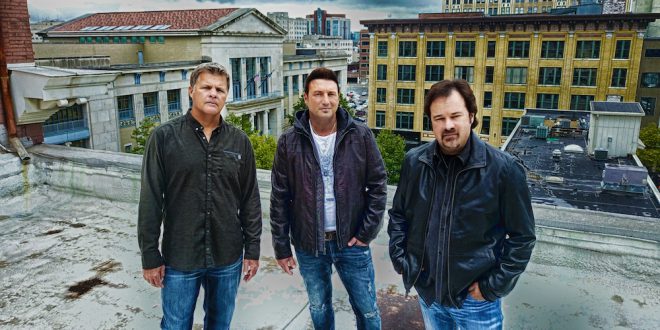 Richie McDonald, lead singer of multi-platinum selling country group Lonestar, has announced his departure from the band. Today McDonald revealed his exit and his plans to tour full-time with The Frontmen of Country — comprised of McDonald, former lead singer of Little Texas, Tim Rushlow, and lead singer of Restless Heart, Larry Stewart. The trio has signed an exclusive deal with The Kinkead Entertainment Agency for live concert bookings.

“I’ve been with Lonestar for almost 30 years and have enjoyed my time with the guys,” explains McDonald. “With everything that has happened in the past year, it has made me think about other things I want to do in life. This opportunity with The Frontmen came up and I’ve decided to go a new direction. I’ve always enjoyed performing with Tim and Larry and I can’t wait to see how this new chapter unfolds. I want to thank my bandmates Dean, Keech and Michael for a great run. I wish them nothing but the best.”

As The Frontmen, the three lead singers have performed together many times through the years. Restless Heart’s Larry Stewart is thrilled about hitting the road with McDonald and Rushlow, backed by a full band for the first time.

“The three of us have proudly performed for our country on battleships USS Bush and USS Truman, in the Middle East and even the Presidential Inauguration,” says Stewart. “Touring the United States for country music fans coast-to-coast, backed by a world class band, performing hit after hit, will be exciting and something we have never done together. I’m looking forward to hitting the stage with these two great singers!”

“We are ecstatic to have this amazing opportunity to bring this show on the road and celebrate the music of three of the biggest bands from the ’90s in one night,” adds Rushlow. “I don’t know that I have ever seen three lead vocalists on a tour like this. There’s a common thread that runs through our collective catalog of hits and it will be awesome to sing them all in one concert event!”

“I’m so excited to be involved with The Frontmen of Country, featuring Richie McDonald, Larry Stewart and Tim Rushlow,” notes The Kinkead Entertainment Agency CEO Bob Kinkead. “I’ve seen these gentlemen perform and they still have incredible vocals and live performance energy. They have been working together as a team of singers for over a decade and now are finally going to work full-time throughout the summer, fall and winter to bring their 30 Number One collective hits to the fans.”

Music editor for Nashville.com. Jerry Holthouse is a content writer, songwriter and a graphic designer. He owns and runs Holthouse Creative, a full service creative agency. He is an avid outdoorsman and a lover of everything music. You can contact him at JerryHolthouse@Nashville.com
Previous The Steel Woods Declare New Album A Tribute To Jason “Rowdy” Cope
Next Thomas Rhett Set To Release 5th Album