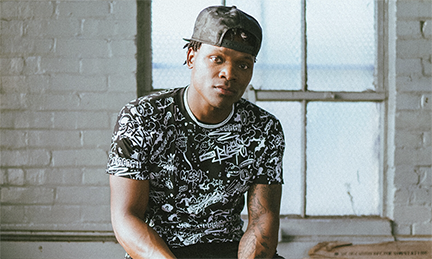 “When I ran across Lathan Warlick on social media I was instantly drawn to his talent and positive message,” says Ash Bowers, President, RECORDS Nashville. “Not only have I become a fan of his artistry, I am also inspired by who he is as a person. I am so excited to share both with the rest of the world.”

A viral music sensation, Lathan first gained attention through social media –1.1M followers on TikTok and 85,000 on Instagram— by creating videos of himself on his iPhone in his truck, adding his own rap verses to popular songs like “Holy” by Justin Bieber, “The Box” by Roddy Ricch, “Memories” by Maroon 5, “Hello” by Adele, and “You Say” by Lauren Daigle. His videos caught the attention of country singer Granger Smith, who asked Warlick to add a rap verse to his song, creating a powerful remix of “That’s What I Love About Dirt Roads.”

“I know that stepping out on faith and taking the leap with Records/Colombia will be an amazing journey for sure,” says Lathan. “I’m still amazed at how God allowed me to find my purpose. Now it’s time for me to just walk in it. I’m super pumped about being part of this team!”

Lathan’s latest song, “Over Yonder” featuring Platinum Country star Matt Stell, powerfully blends hip hop patriotism with a call for unity. As teased on social media Lathan is gearing up for a big year, having recently collaborated with some of Nashville’s biggest names including Tyler Hubbard of Florida Georgia Line, Dustin Lynch, RaeLynn, and more!

The Jackson, TN rapper was awakened to his creative purpose one life-changing day after coming face-to-face with a 45-caliber pistol. Lathan self identifies as a “positive artist” who reflects on his upbringing in a rough neighborhood and has gained a transformative perspective as a Christ-follower, husband, and father in his songwriting. He self-released his own EPs, Tellem That Im Comin (2016), 2nd Time Around (2017), and A Church in the Trap (2018), before connecting with his manager Ash Bowers, joining the Wide Open Music family alongside artists Jimmie Allen, Matt Stell, and Chris Bandi in April 2020.

Music editor for Nashville.com. Jerry Holthouse is a content writer, songwriter and a graphic designer. He owns and runs Holthouse Creative, a full service creative agency. He is an avid outdoorsman and a lover of everything music. You can contact him at JerryHolthouse@Nashville.com
Previous Brad Paisley & Blake Shelton To Host Opry Anniversary Special
Next Luke Combs Extends Record-Breaking Streak