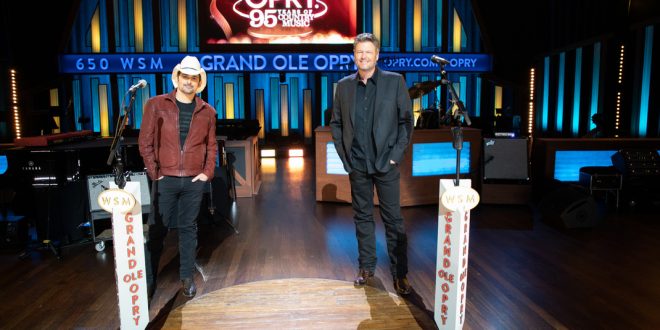 Grand Ole Opry members Brad Paisley and Blake Shelton will serve as co-hosts for “Grand Ole Opry: 95 Years of Country Music,” honoring the iconic Nashville show and the incredible country stars that call it home. The two-hour special is set to air Sunday, Feb. 14 at 9 p.m. ET/PT on NBC.

Later that same week, Paisley will celebrate his 20th anniversary as a Grand Ole Opry member. Shelton is marking 10 years as a member.

The anniversary special brings together artists from across generations who share a passion and reverence for the Opry. With country music stars not only performing their biggest hits, but also covering classics from some of the Opry’s most famous members, it will be an unforgettable night of music. In addition to the incredible performances, the Opry will open its archives that span a period of over nine decades and include interviews, performances and appearances by country artists in all stages of their careers.

Music editor for Nashville.com. Jerry Holthouse is a content writer, songwriter and a graphic designer. He owns and runs Holthouse Creative, a full service creative agency. He is an avid outdoorsman and a lover of everything music. You can contact him at JerryHolthouse@Nashville.com
Previous Carrie Underwood To Release Gospel Album “My Savior”
Next Records Nashville Signs Rapper Lathan Warlick