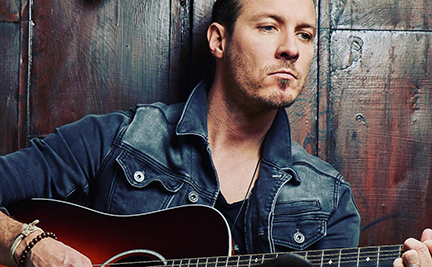 After two years of hard work and anticipation, Rayne Johnson is releasing his debut, self-titled EP today via Mountain Road Records/VERGE. The nine-track project features Rayne’s current single, “Real Dang Good,” which was recently introduced to country radio and is making its way up the charts.

Between working a full-time job on the railroad – a position he’s held since graduating from high school – and creating music, the Fairfield, OH native has put in overtime to introduce fans to his first full-length project. The singer/songwriter amplifies traditional country tales through soulful vocals bolstered by rock energy and a twist of R&B. Generating over 43 million streams independently and receiving acclaim from CMT and Taste of Country, who crowned him “a smooth operator,”  he introduces a singular sound and story on his self-titled EP.

“I have always been fan of multi-genre music,” explains Rayne. “I grew up listening to country radio above all else, but also really loved Boyz II Men. For me, it was all about the storytelling. My personal brand of country is upbeat and combines different sounds that have influenced me over my lifetime.”

In addition to the current single, the EP features track “Front Seat,” written by Rhode Island singer/songwriter Joe Jordan, which propelled Rayne into the Top 40 on the Billboard Country Airplay and Mediabase Country Aircheck charts earlier this year as an independent artist (before he signed with Mountain Road Records/VERGE). Rayne himself contributed to the writing process on “Bring it Back” with frequent collaborator Jordan and Nashville songwriter Walt Aldridge.

While it has been an unfortunate year for live music, Rayne will treat one lucky fan to a safe, private concert, live in their backyard, in the coming months. Fans can sign up via Rayne’s email list HERE to receive more information on how they can win the exclusive experience.

Music editor for Nashville.com. Jerry Holthouse is a content writer, songwriter and a graphic designer. He owns and runs Holthouse Creative, a full service creative agency. He is an avid outdoorsman and a lover of everything music. You can contact him at JerryHolthouse@Nashville.com
Previous Lindsay Ell & Mitchell Tenpenny To Perform At Christmas 4 Kids Event
Next The 54th Annual CMA Awards Announce Additional Performers