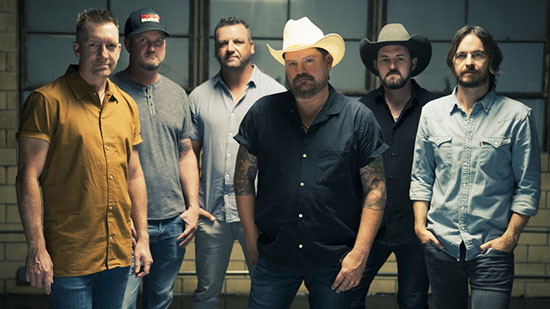 On October 14th The Randy Rogers Band is looking back to the past for their brand-new project, Homecoming. Filled with nostalgia, the evocative project launched its first single, “Picture Frames,” in 2021, which became a #1 smash at Texas Country radio.

Conjuring memories of first heartbreaks, small towns and cherished memories, Homecoming is the Texas band’s ninth studio album and marks their 20-year anniversary. The project is a renaissance for the Randy Rogers Band, keeping the sounds and traditions that have made them so beloved over the past two decades and delving into deeply personal topics sure to resonate with audiences around the world.

The band’s latest release, “Nothing But Love Songs,” details the unpleasant experience of being fresh off a breakup and hearing “nothing but love songs” each time you turn on the radio. Written by Randy Rogers with Radney Foster and Jon Randall, the lonesome track accents Rogers’ plaintive words with a fiddle and electric guitar.
“This song embodies the sound that created the last two decades of touring for our band,” Rogers shares. “Recorded and written with Radney Foster, it’s a return to the origins of the Randy Rogers Band.”

Music editor for Nashville.com. Jerry Holthouse is a content writer, songwriter and a graphic designer. He owns and runs Holthouse Creative, a full service creative agency. He is an avid outdoorsman and a lover of everything music. You can contact him at JerryHolthouse@Nashville.com
Previous Country For A Cause Raises $31,600 For Monroe Carell Jr. Children’s Hospital
Next LISTEN: Miko Marks’ “One More Night”