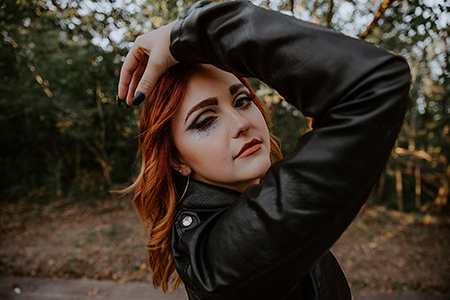 Today Nashville.com is proud to debut alternative pop violinist, singer-songwriter, and performer Aria Mae’s debut EP, “Smoke Screen Dreams.” Listen to the EP here. The talented violin session player is classically trained and is based here in Nashville. Aria made the switch into the pop/rock/improv world influenced by Halsey, Lindsey Stirling, and Lorde. Hailing from her home state of Michigan she incorporates the sights and sounds she grew up with into her lyrics and compositions, whether it’s the morning sunrise on Lake Michigan or the hustle and bustle of the Grand Rapids cityscape. As an evolving songwriter, she is finding her sound within the alternative pop genre, inspired by her life stories and her journey. Her classical roots lend themselves to the intertwining of orchestral sounds with a modern twist. Aria’s inventive new sound is pioneering a creative path for classicals and moderns alike.

Aria started writing her debut album after the loss of her right eye due to an accident at the age of 14. Her debut album features a song titled “Rain”, written about her experience fighting for her medical rights. Aria was met with constant objections from her medical team to remove the eye. She wanted to have it removed due to the unbearable chronic pain. She endured seven surgeries during this traumatic time in her life and after five years of fighting for her medical rights, her surgeons finally removed the eye at age 19. Now at the age of 21 Aria uses her disability to inspire other women with her social media platforms by promoting stunning makeup looks & fun prosthetics. She chooses to channel the pain she’s been through into creating beautiful art and speaking her truth.

Music editor for Nashville.com. Jerry Holthouse is a content writer, songwriter and a graphic designer. He owns and runs Holthouse Creative, a full service creative agency. He is an avid outdoorsman and a lover of everything music. You can contact him at JerryHolthouse@Nashville.com
Previous Chase Rice Giving Back To His Band And Crew
Next Florida Georgia Line Address Rumors Of Breakup