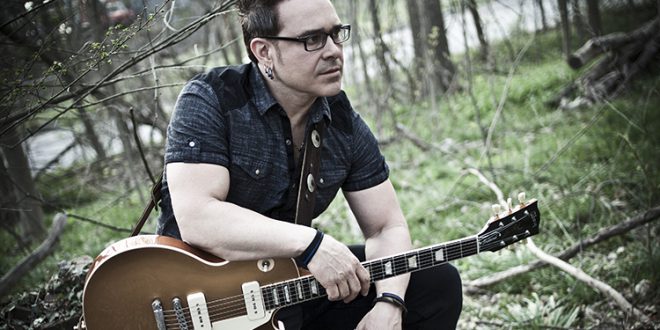 After a successful, long-time career as a band member, Patrick James is exploring his talents as a solo artist. James – former member of groups such as Pound, Flywheel and Four By Fate – is excited to take on the new challenge and express himself as an individual. With his new solo project, the Patrick James Band, individuality is exactly what‘ll be on display for his debut performance at 3rd and Lindsley on Wednesday, June 13 at 6 p.m. CT. Admission is FREE and open to the public.

Patrick James is known for such award-winning hits as “Upside Down” which reached #15 On the Billboard charts from his band Pound (Universal/Island Records). Also, his production and writing on Sugar Red Drive’s debut single “One More Time,” reached #30 on the Mediabase Active Rock chart. The lead off single from Rachel Lorin’s debut song “I Hate You,” was also written and produced by Patrick James, and reached #39 on the Mediabase Active and Mainstream Rock charts. Patrick also wrote four songs on Relentless, the latest album from Four By Fate.

Patrick James (vocals, guitars) assembled a first-class list of band mates in John Regan, Peter Gallinari, Sandy Gennaro, Andrea Young, Smith Curry and Jeremiah Richey. Each come with stellar resumes, having toured and/or recorded with many legendary artists over the course of their careers.

John Regan is a founding member of Ace Frehley’s band Frehley’s Comet, and whose also recorded and performed extensively with Peter Frampton from 1979-2011. Regan also laid down bass tracks with Mick Jagger & David Bowie on “Dancing In The Streets” for 1985’s Live Aid.

Smith Curry has a laundry list of household names in music that he has either recorded or performed with during his career including Dolly Parton, Jason Aldean, Kid Rock, Keith Urban, and Randy Travis just to name a few.

Sandy Gennaro’s touring and recording credits include collaborations with Cyndi Lauper, Joan Jett and the Blackhearts, Bo Diddley, The Monkees, and The Mamas and Papas.

Andrea Young has toured and played on sessions throughout the U.S. & Europe backing such artists as Lady Antebellum, Bo Bice, George McCorkle (of the Marshall Tucker Band), and Kenny Olson (of Kid Rock). She has also opened for Darius Rucker, Brooks & Dunn, Jason Aldean, and Charlie Daniels.