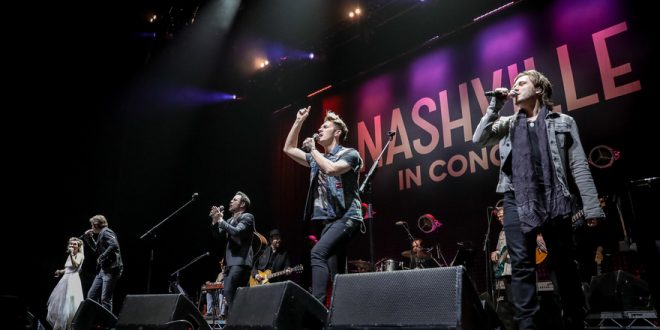 “Nashville” stars Clare Bowen, Chris Carmack, Charles Esten, Jonathan Jackson and Sam Palladio wrapped up their third and final international tour playing to packed houses in the UK and Ireland. They kicked off the tour with commanding and enthusiastic crowds in Birmingham and Leeds and then played to close to 10,000 fans in Glasgow. The cast made a meaningful and emotional return to Manchester where they played the Manchester Arena after the tour had to relocate to Manchester’s O2 Apollo in 2017 after the terrorist attack just one month before. The stars continued on to a sold-out crowd in Cardiff before playing to over 11,000 fans at the O2 in London. The “Nashville” stars closed out their tour in Ireland with rousing crowds in Dublin and Belfast.

“For everyone involved, this tour was a love fest with the fans and no one wanted it to end,” said Steve Buchanan, President, Opry Entertainment. “The cast will never forget the extremely enthusiastic fan support they enjoyed in the UK and Ireland. The pinnacle moment may have been the packed performance at the O2 in London.  It’s amazing to think of how far the cast has come from their first show together five years ago at Joe’s Bar in Chicago.”

Tour stops featured songs from the series as well as artists’ original material. NASHVILLE In Concertstaged sold-out tours in the UK and Ireland in 2016 and 2017.

At the 2017 NASHVILLE In Concert tour stop at London’s famed Royal Albert Hall, in front of a sold-out crowd, the stars of “Nashville” including Clare Bowen, Chris Carmack, Charles Esten, Jonathan Jackson and Sam Palladio delivered a show-stopping performance that included a mix of songs made famous by their characters as well as some of their own original material and personal favorites. In addition to their solo performances the cast teamed up to recreate some classic collaborations and all was captured for the anticipated DVD release of NASHVILLE In Concert At the Royal Albert Hallon April 27. The DVD will include bonus footage “Nashville In London” of the performers discussing the songs they sing live.

The tour is produced by Opry Entertainment.

“Nashville” airs in 225 territories worldwide. Since its debut, the show has inspired 22 soundtracks, including a Christmas album, which have collectively sold more than one million album units and over 5 million single-track downloads to date. It has also been nominated for multiple Emmy, Golden Globe and Critics Choice awards. Currently in production, “Nashville” is produced by Lionsgate and Opry Entertainment. The current season of “Nashville” premiered in the U.S. on Thursday, January 4 at 9pm ET/PT only on CMT.  The 16-episode season will air in two parts, with the finale airing in the summer (exact date TBD). Long-time SVOD partner Hulu will continue to bring fans new episodes of “Nashville” by making them available to stream the day after they air on CMT, and the complete series can be streamed exclusively at http://www.hulu.com/nashville.

Music editor for Nashville.com. Jerry Holthouse is a content writer, songwriter and a graphic designer. He owns and runs Holthouse Creative, a full service creative agency. He is an avid outdoorsman and a lover of everything music. You can contact him at JerryHolthouse@Nashville.com
Previous Parmalee Releases “Six-Pack” With “Hotdamalama”
Next Morgan Wallen Releases Debut “If I Know Me”