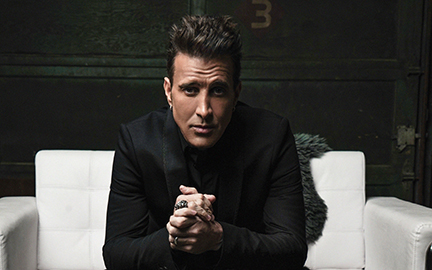 Grammy-winning songwriter, voice of Creed and Nashvillian (about 3 years now) Scott Stapp has released a provocative, timely visualizer for new single, “Survivor.” The song debuted today and takes the place of a live-action video, which was cancelled to observe social distancing recommendations.

“Survivor,” went to radio in early April as the follow up to Scott’s highest-charting single since 2005 (“Purpose For Pain”). In its first week, “Survivor,” was the most-added song in America, with over 40 stations adding it to rotation and featured on SIRIUS’ Octane channel. By its 2nd week, the song cracked the Top 40 and was added to Spotify’s Adrenaline Workout and Heavy Gamer playlists.

The song is a fighter’s anthem that reflects the mentality Scott summoned when losing hope in his personal battles. It is a positive affirmation, a bold statement of faith, powerfully delivered.

“‘Survivor’ is about a mindset when facing adversity,” says Scott. “Holding on to faith, positive affirmation, self-realization, speaking and believing things into reality are all elements of this mentality. It’s a mindset that helps give you strength to keep fighting, enduring, and maintaining the courage to continue to fight to make it to the other side, to overcome, to win, to survive.”

The video uses imagery both personal and universal – Scott in a storm of shattered glass; an impoverished child representing the work of ChildFund International, for whom he is a spokesperson; survivors of cancer, sexual abuse, trafficking, and racial discrimination; survivors of war, the plight of the immigrant, and homeless individuals willing to work to overcome their misfortune are all referenced. In a poignant moment, a masked citizen and the definition of “survivor” appears – “remains alive or lives through an affliction.”

Throughout the video, a muscular, caped “hero” juxtaposed amongst the imagery is a reminder that not all heroes wear capes. “All survivors are heroes,” Scott said. “If you’re working each day to overcome, through the sheer force of faith, will, and strength, you’re a survivor.”

Scott’s faith, a defining aspect of his sobriety and a frequent concept in his songwriting, provides some of the strongest rally cries, “I stand here, baptized by the fire, a survivor” and “alive, ‘cause I believed.”

It’s no mystery what demons and struggles Scott is shouting at with, “you messed with a fighter,” and “how ya like me know?!” but listeners will think of their own as they apply the song to the most daily of obstacles as well as life’s more complex challenges.

Music editor for Nashville.com. Jerry Holthouse is a content writer, songwriter and a graphic designer. He owns and runs Holthouse Creative, a full service creative agency. He is an avid outdoorsman and a lover of everything music. You can contact him at JerryHolthouse@Nashville.com
Previous John Hartford Tribute Album Drops June 26th
Next Lewis Brice Hits Number One At Radio Disney Country